A high school student at Burnaby North Secondary was yelled at and pushed by another student for putting a pro-Hong Kong poster on her locker.

Tensions between pro-Hong Kong supporters and pro-China supporters in Metro Vancouver found their way into a local high school when strong emotions led to a heated incident between students at Burnaby North Secondary School.

An argument over the geopolitical situation in Hong Kong played out on Sept. 22 in a hallway at Burnaby North Secondary.

Part of what happened was caught on cell phone video. 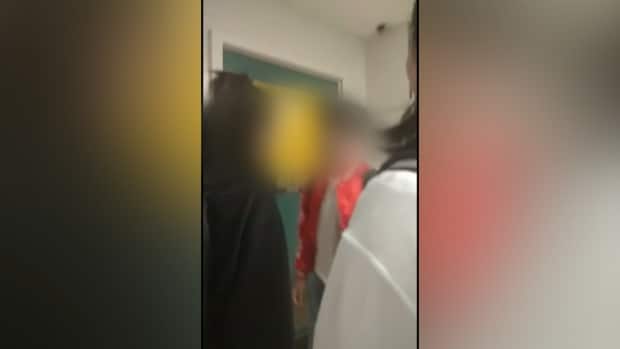 1 year ago
0:22
A high school student at Burnaby North Secondary was yelled at and pushed by another student for putting a pro Hong Kong poster on her locker. 0:22

"It was kids who had put up a 'free Hong Kong' poster on their locker," said principal Dave Rawnsley.

"Other students took issue with that and wanted them to remove the poster and so what you saw was them trying to get past the student who was protecting her poster and not wanting it to be taken down. And unfortunately, the incident led to them getting a little more physical than we would like to see."

A young male student who disagreed with the pro-Hong Kong poster is seen on the video shoving a female student. It's unclear what happened in the moments before the recording began.

But afterwards, a female student can been heard speaking to the young man in the video.

"Relax, it's okay. It's Canada. You can have your opinions. We can have our opinions. We'll just leave each other alone. We have not physically attacked you guys," she said.

Rawnsley said staff broke up the argument, and have spoken to the four students involved as well as their parents. He would not say if any of the students have been disciplined.

"The message we want to [send to] parents and kids is that school needs to be a safe place for all kids, needs to be a place where they can be physically safe but also safe to express their opinions."