The Integrated Homicide Investigation Team has taken over the scene of a fire in Coquitlam, B.C., that left two people dead.

Firefighters found one man, one woman dead inside the burning home 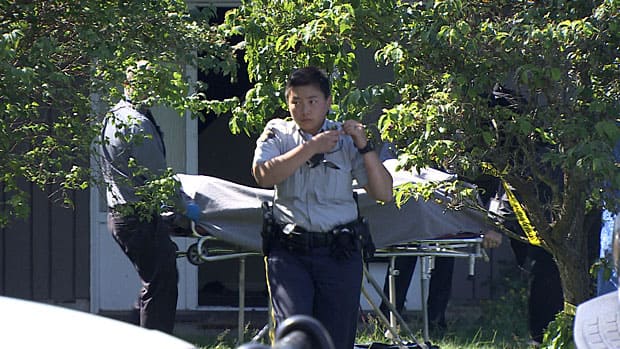 7 years ago
2:35
Friends say homeowners were involved in divorce proceedings 2:35

The Integrated Homicide Investigation Team has taken over the scene of a fire in Coquitlam, B.C., that left two people dead.

The fire broke out in the home at 1140 Cottonwood Avenue, near Como Lake Park, just after midnight Tuesday morning. Neighbours report hearing a scream and bang before the flames broke out in an upstairs bedroom.

Police say a section of the home was engulfed by the time firefighters arrived, and crews found the bodies of a man and woman inside the burning home.

"Right now, this is really all we can say. It’s in the very early stages [of the investigation]," said RCMP Cpl. Daniel Rettenbacher early Tuesday morning.

Police say it doesn't appear anyone else was inside the home at the time.

The home, which is also housed a French daycare, has a sign out front indicating it was recently sold.

Investigators are still trying to determine how the man and woman died, the victims' identities and the cause of the fire.

Police are calling the fire suspicious and say they don't believe anyone else is involved in the deaths. But they wouldn't speculate as to whether it could be a murder-suicide.

Neighbours say a mother of three who was recently separated lived in the home with her adult son.