Election Cycle: It's all about principles — and housing, Hector Bremner tells Stephen Quinn

Hector Bremner's platform is still being developed — except on the issue of housing, which is the topic of a 49-page action plan. 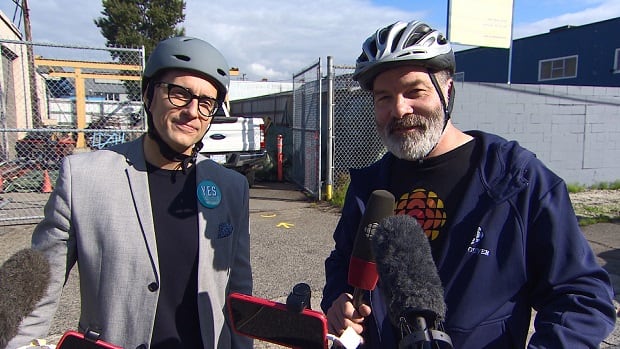 Vancouver mayoral candidate Hector Bremner said he could have parked his principles and contented himself to merely run for council this election.

But, he added, he prides himself on his authenticity — and that's why he says he decided to start a new political party and run for the mayor's seat himself.

"I'm not running because it was a good career move for me," Bremner said. "I've stuck to what I really believe is going to fix our city."

Every week until the vote on Oct. 20, The Early Edition host Stephen Quinn will saddle up for a bike ride with a different mayoral candidate to get to know them and their policies a little better.

This week, he rode through Grandview-Woodlands and the Downtown Eastside with Bremner of the new Yes Vancouver party.

What Bremner believes is going to "fix" Vancouver is housing — and lots of it.

His party's website says its platform is still being developed, except on housing, which is the topic of a 49-page action plan.

"This is borne out of a movement of people that wanted to park the politics and get the job done," Bremner told Quinn.

It calls for measures to allow for 50,000 new rental homes in the city in three years; fast-tracking permits; density throughout the city and a citywide "pre-zoning" to prioritize the "highest and best use" of the city's land base.

That approach would benefit the Downtown Eastside, he said, by creating barrier-free housing, offering up city land and speeding up approvals for non-profit housing.

And although Bremner was only elected in a byelection last October, he points out that he is the only mayoral candidate who has sat on council.

"I believe we're going to get the job done," he said.

With files from CBC Radio One's The Early Edition