Happy news for newlyweds who lost everything in U-Haul heist

It's not a completely happy ending for the newlywed New Brunswick couple who had all their worldly possessions stolen while moving to B.C., but it's pretty close.

It's not a completely happy ending for the newlywed New Brunswick couple who had all their worldly possessions stolen while moving to B.C., but it's close.

Over the weekend, Nathan Drover and Sabrina Perry-Drover were reunited with most of their belongings after police executed a search warrant at a South Surrey property, recovering 12 stolen vehicles and the contents of two stolen U-Hauls, including the Drovers'.

Unfortunately, some of the couple's possessions, including memorabilia from their recent wedding, is still missing.

The Drovers' U-Haul was stolen in Abbotsford the night of Sept. 12 and found empty the next day in Surrey.

MacDonald said media attention around their plight helped officers with the Lower Mainland District Integrated Road Safety Unit connect the dots to an individual and residence in the 17300 block of Fourth Avenue in Surrey.

Last Thursday Michael Urbaniuk, 39,  was arrested in a stolen vehicle at the residence.

Urbaniuk was wanted on outstanding warrants and was additionally charged with driving while prohibited and possession of stolen property.

Soon after, police were able to gather enough evidence to obtain and execute a search warrant on the property.

Video of the bust, which recovered an estimated $250,000 in stolen property, was taken by police from a helicopter.

"I would say it was a massive criminal enterprise with stolen vehicles from Abbotsford, Mission, Maple Ridge, Langley and as far away from the Fraser Valley as Richmond," said MacDonald.

"This is an illustration of how a small number of individuals and a property can become a hornet's nest for crimes that plague many communities."

MacDonald says more people could be facing charges as the investigation continues. 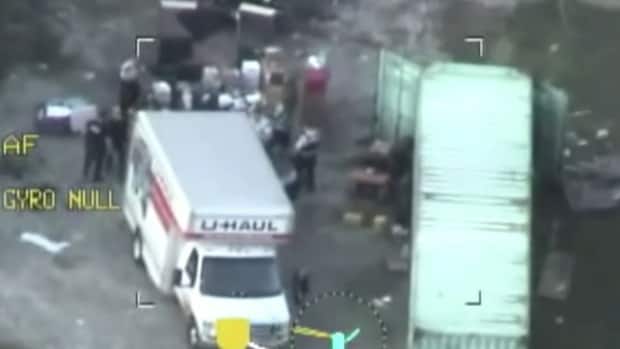