'Our culture is going to survive': traditional Indigenous hand games make a comeback in northern B.C.

Traditional Indigenous hand games, played against the sound of the snare drum, were almost silenced in northeastern B.C. a generation ago.

Traditional Indigenous hand games, played against the sound of the snare drum, were almost silenced in northeastern B.C. a generation ago.

Now, thanks to members of the Fort Nelson First Nation and a new tournament, the games and the skill that goes with them are making a comeback.

Kathy Dickie watched the tournament with her grandson and described how "absolutely amazing" it was to see a tradition come back to life after nearly being lost.

As children, she and her siblings were removed from the region and sent to different residential schools across B.C. and Alberta.

"Our culture is going to survive, it's going to last."

Based on a traditional form of gambling, the high-stakes, high-action game features drumming, sleights of hand and bluffing. Teams of four try to outsmart their opponents who guess which hands are holding hidden objects.

"It's amazing how many connections are made through this game," said Curtis Dickie, the newly elected chief of the Fort Nelson First Nation.

"I've reconnected with many family members that I never knew I had and made lifelong friendships."

Chief Dickie, Kathy Dickie's nephew,  also missed out on the tradition while growing up, but recognizes it as vital to the survival of his nation.

He played in his first tournament four years ago while in the Northwest Territories.

"When I my son was born, I knew that I had to do something," he said.

"That's when I started traveling and making connections and really playing the game."

Watch a clip of what the hand games look like: 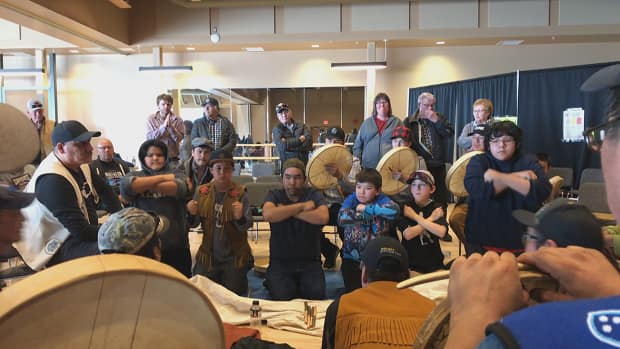 1 year ago
0:16
A hand game tournament was held in Fort Nelson last month, bringing together players from the Yukon, Northwest Territories and the Fort Nelson First Nation. 0:16

In March, they held a second one that coincided with hundreds of international visitors travelling to Fort Nelson for the Northern Lights Festival.

Hand game players from the Yukon and  Northwest Territories travelled to Fort Nelson to compete in the three-day tournament.

For Dickie, seeing so many youth participate was hugely important.

"First Nations youth in our community are struggling," he said.

"There's a generation that has raised kids — the parents went to residential schools so they had issues — and that's trickled down into the kids."

The first tournament saw two Fort Nelson youth show up. This time, 14 youth participated — and they walked away with the $25,000 cash prize.

The relationships that come from the games are still the key element for Dickie, though.

"It's so important to have those positive role models, somebody they can look up to," he said.

"That's probably the most important part of the hand games and the youth being involved."

With files from Carolina De Ryk and The Early Edition