The recent West Coast earthquake appears to have shut off the water at the popular hot springs in Haida Gwaii's national park, but there is hope they could reappear someday. 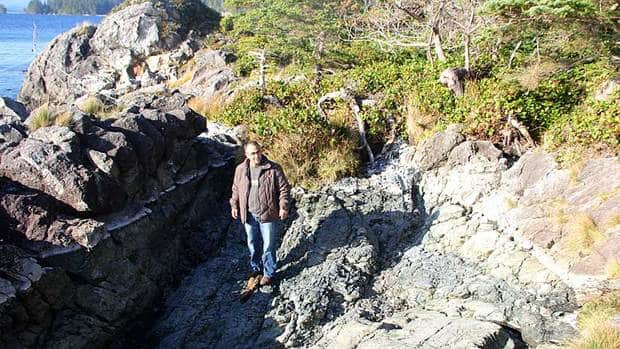 The recent West Coast earthquake appears to have shut off the water at the popular hot springs in Haida Gwaii's national park, but there is hope they could reappear someday.

After Saturday's 7.7 magnitude earthquake, Parks Canada workers went to check the springs and found they had run dry, according to Barb Rowsell, who owns Anvil Cove Charters.

"Three people went down to check it out, and sure enough there is no hot water and the rocks are dry and cold," said Rowsell, who has been ferrying visitors to Hotspring Island for years.

The popular natural attraction in Gwaii Haanas National Park has been a major tourist draw for decades.

The park's superintendent Ernie Gladstone said the springs were still steaming last week, but now, to his dismay, there is not even a puddle left.

"We did have staff on site on Thursday before Saturday's events, and now less than a week later the water's not flowing so we have to assume it's a result of Saturday's earthquakes or one of the many aftershocks since then," said Gladstone.

It's not yet clear why or when the springs dried up, but geological experts will be investigating what may have happened in the days to come, Gladstone said.

Some locals on Haida Gwaii say the hot springs have disappeared in the past after an earthquake, only to reappear a couple of years later.

UBC seismologist Michael Bostock said that once the underlying plates start grinding again, stresses in the fault line are likely to build up in the same locations.

"When the earthquake struck last weekend, openings along the fault line changed and the fracture that resulted in hot springs was likely closed."

He said he can't be certain the hot springs will return, but "it seems like a good bet, given the way that things have behaved in the past."

Natural attraction will be missed

Carol Kulesha, the mayor of the village of Queen Charlotte, said the natural attraction will be missed by locals as much as tourists.

"Even though it's a distance from Queen Charlotte, it's something we all like to go to whenever we have an opportunity."

Rowsell, the tour operator, said she is trying to be philosophical about their disappearance, and that she hopes tourists will keep coming to the region anyway, for its other beauties.

"Well, as my husband said, the Earth gives and it takes away."

The 7.7 quake struck just after 8 p.m. Saturday and residents of the region reported the shaking lasted for up to a minute, but there was no damage to homes or other structures reported.

It was the largest quake recorded in Canada in 60 years and struck just off the coast of Haida Gwaii. Dozens of aftershocks as strong as 6.3 have since rattled the region.