Hackers intent on exposing groups that promote racial hatred have revealed the names of dozens of Canadians allegedly associated with white supremacist and neo-Nazi organizations, CBC News has learned.

Data exposes people associated with Blood and Honour and Volksfront 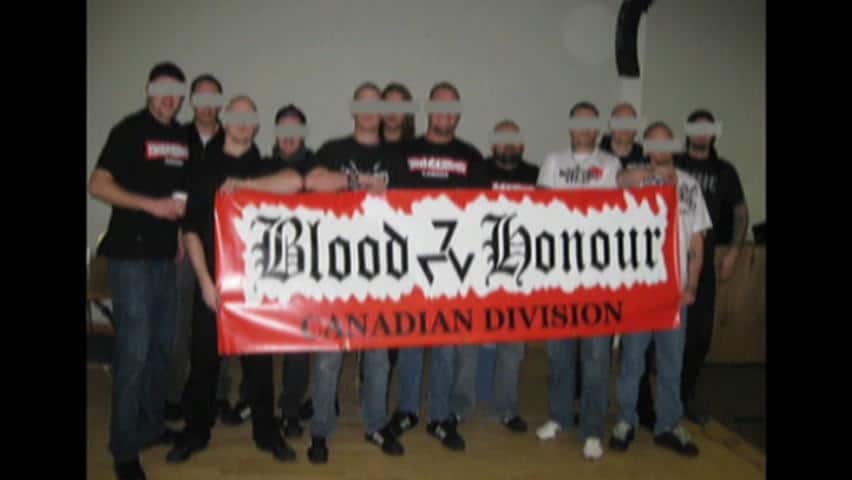 9 years agoVideo
2:59
CBC's Natalie Clancy looks at a number of Canadian neo-Nazi groups that have been using the internet to spread hateful messages 2:59

The names of dozens of alleged white supremacists in Canada are contained in files leaked by computer hackers in Europe intent on exposing hate movements, CBC News has learned.

The alleged white supremacists' names were revealed earlier this month by members of a loose-knit group of hackers called Anonymous on a website called nazi-leaks.net, which is now offline.

In addition to emails and secret websites and blogs, the hackers uncovered photographs of children giving Nazi salutes at a gathering in Missouri, confidential legal documents and displays of Hitler tattoos.

The exposure is a huge blow to hate groups that organize online across Canada, said Helmut-Harry Loewen, a University of Winnipeg sociology professor and a member of the Canadian Anti-racism Education and Research Society.

"We can now begin to piece together a more accurate picture in terms of the distribution of these types of racist groups across Canada," Loewen said.

Among the information hacked were the names of 74 Canadians, with associated street addresses, email addresses and passwords - who were hacked from Blood and Honour and from a website that sells nazi and military paraphernalia.

Also leaked were 142 e-mails from people who had joined Blood and Honour's Canadian online forum.

Attention has been drawn to Blood and Honour since the arrests in December of three alleged members of the organization who have been charged with attacks on five members of visible minorities in B.C.'s Lower Mainland.

The names of two of the accused, Alistair Miller and Robertson De Chazal, show up in the files uncovered by the European hackers. Miller, 20, and de Chazal, 25, are charged with an attack in which a sleeping Filipino man was apparently sprayed with a flammable liquid and set on fire.

"[These organizations] are going to have to be even more careful in terms of who they trust, who they associate with," said Loewen. "They're going to have to look over their shoulders. The police will have access to this info once it becomes more widespread. Employers, neighbours and so on."

Another name uncovered by the hackers was that of Bill Noble, who in 2008 was convicted in B.C. of wilfully promoting hatred.

Noble is upset thousands of emails concerning his white supremacist views, legal woes, infidelity, and even some details of his online dating were exposed.

"If it can be determined that any of these individuals carried out these acts, because they were fully aware that they were interfering with the survival of an endangered race, then they should indeed be exterminated," Noble said in an interview with CBC News via Skype from a location he would not reveal.

"Obviously someone is really trying to harass me and cause problems for me," said Noble. "It's annoying as hell and it's probably compromised a lot of private information."