'Together, we are unstoppable': Greta Thunberg addresses thousands at Vancouver climate rally

Swedish climate activist Greta Thunberg addressed thousands of demonstrators at a rally in downtown Vancouver on Friday, an event billed as a post-election push for Canadian leaders to take action on the climate crisis.

Crowd estimated to be around 10,000, according to police

Swedish climate activist Greta Thunberg addressed thousands of demonstrators at a rally in downtown Vancouver on Friday, an event billed as a post-election push for Canadian leaders to take action on the climate crisis.

"The people in power are still acting as if there was no tomorrow," Thunberg, 16, told to the cheering crowds.

"We young people are telling them to stop doing that, to stop ignoring the consequences of their actions and inactions."

The teenage activist began her weekly school climate strikes in her native Stockholm more than a year ago, and her following has grown in recent months.

"We are a wave of change and, together, we are unstoppable," Thunberg said.

"We will make world leaders act. We can and we will." 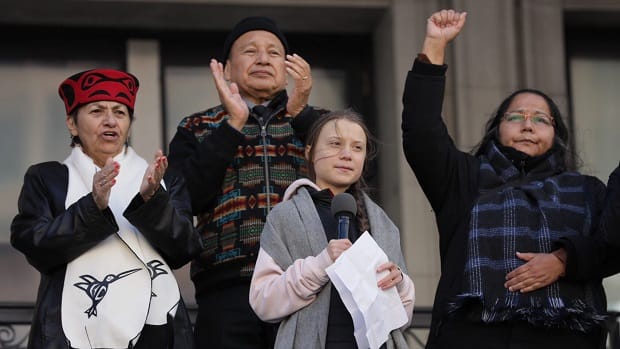 1 year agoVideo
3:56
The Swedish climate activist addressed thousands of protesters, who rallied for Canadian leaders to take action on the climate crisis. 3:56

Earlier in the morning, prior to her speech, demonstrators gathered in downtown Vancouver and spilled out onto the sidewalks, chanting "Another world is possible, we are unstoppable."

The strike is organized by local youth climate strike organizing group Sustainabiliteens, building on the momentum of large-scale climate strike in September, which saw over 100,000 people in the streets of downtown Vancouver.

After gathering in front of the Vancouver Art Gallery in the morning, the crowds started off a three-kilometre march through the downtown streets. Thunberg joined them, marching with her a signpost tucked under her arm, before giving her speech.

The Vancouver rally coincides with the filing of a lawsuit from 15 youths across Canada, who say the federal government's policies have contributed to high levels of greenhouse gas emissions and are making "dangerous" contributions to climate change.

The group is claiming their charter rights have been violated because, for one, younger people are disproportionately affected by climate change.

The group has some powerful backers, including representation from high-profile constitutional lawyer Joseph Arvay. Our Children's Trust, a non-profit involved with a similar suit from teens in the United States, is also involved in the case, while the David Suzuki Foundation is backing the teens by supporting the case's legal framework and acting as a communications lead.

"This is just the beginning, we will continue," Thunberg said, finishing her speech.

"Change is coming, whether you like it or not."