The Lower Mainland's busiest traffic choke point was snarled for hours by a pro-Canucks display by what appeared to be the Green Men, but appearances can be deceiving, CBC News has learned. 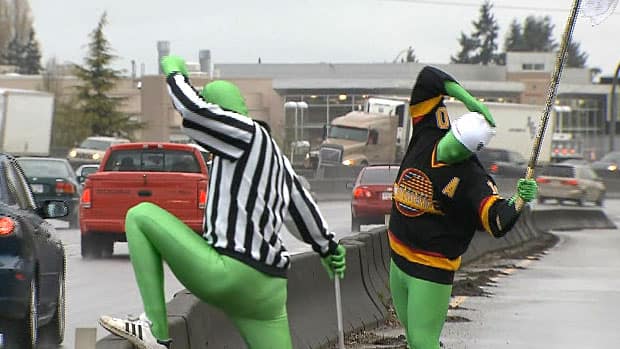 10 years ago
2:01
The CBC's Susana da Silva reports on the Green Men imposters who slowed the commute in B.C.'s Lower Mainland as drivers slowed down to watch 2:01

The Lower Mainland's busiest traffic choke point was snarled for hours on Thursday morning by what appeared to be the Green Men, but appearances can be deceiving, CBC News has learned.

Rik Chung was one of hundreds of commuters whose morning began with traffic reports that spandex duo was out at the north end of the Massey Tunnel trying to rev up Canucks fans and slowing down traffic.

"They looked like the real guys, all dressed up totally in green," said Chung.

As people slowed to catch a glimpse of the dynamic duo dressed in their trademark bright green spandex body suits, traffic was backed up for miles, adding nearly an hour to some people's commute.

Meanwhile one of the real green men, Force, was also beginning his day with some unexpected interruptions.

"I woke up this morning to about 17 different phone calls from people telling me that I had ruined their morning commute," said Force.

But Force says he was in Victoria on Thursday morning, nowhere near the traffic jam south of Vancouver.

"It was not us slowing down traffic. We appreciate this guy's enthusiasm -- but it was not us," Force told CBC News.

So who was it? A CBC investigation tracked down Chris Jordan at 1-888-burnt-out, who admitted he was one of the imposters.

"That was us – yeah," said Jordan, who said his goal was to rev up Canucks fans for Thursday night's opening game against the Nashville Predators, and maybe advertise his product. But Jordan was not taking responsibility for the traffic jam.

"There's traffic snarl-ups at the Massey tunnel every day, so was it all due to that? I don't think so, but it probably didn't help any I guess," he said.

For his part, the real Green Man says imitation is the sincerest form of flattery, but Force warns dressing up in tight body suit may not be for everyone.

"The green spandex reveals all," he said.

Anyone wanting to see the real Green Men should keep their eyes on the visitors penalty box as the Canucks continue their battle in the playoffs. Thursday night's game starts at 6 p.m. on CBC TV.