Gino Odjick, ex-Canucks enforcer, may have 'months or even weeks' to live

Former Vancouver Canucks enforcer Gino Odjick has a rare terminal heart illness affecting his heart, and doctors say he may have as little as a few weeks to live.

'In my heart, I will always be a Canuck,' wrote Odjick in an open letter to fans and teammates 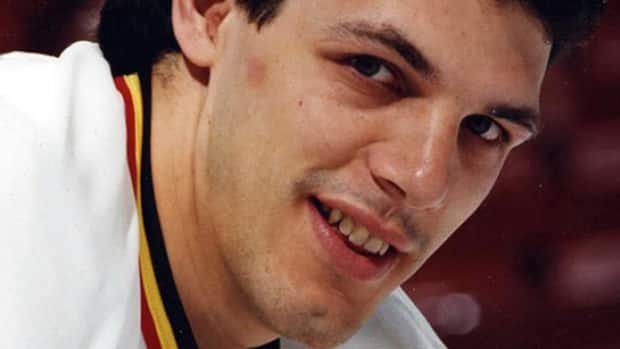 Gino Odjick fighting for his life

7 years ago
2:23
Former Canuck in hospital suffering from a rare cardiac disease 2:23

Former Vancouver Canucks enforcer Gino Odjick has a rare terminal illness affecting his heart, and doctors say he may have as little as a few weeks to live.

Odjick, in a letter published Thursday on the Canucks' website, said he was diagnosed with AL (Primary) amyloidosis two months ago.

"It's causing abnormal protein to be produced and deposits are being formed on my heart," said Odjick. "It's hardening my heart and my doctors aren't sure how long I have to live.

"Initially they thought years, but now they think it could be a lot less. I could be down to months or even weeks," he wrote in the open letter to fans.

8 years as a Canuck

The 43-year-old Odjick played from 1990-2002 in the NHL, including eight years in Vancouver and two in Montreal.

In the letter, Odjick thanked fans for their support over the duration of his career.

"Your 'Gino, Gino' cheers were my favourite. I wish I could hear them again. You have been amazing," he wrote.

It means "the world to me that my hockey career gave me a chance to open doors for kids in the aboriginal community. I was just a little old Indian boy from the Rez. If I could do it, so could they."

Cliff Ronning, a fellow Canadian and former Canucks forward who played with Odjick in the early 1990s in Vancouver, called him "a true warrior" who is "definitely in for the fight of his life."

"I know right now he's really focused on being with his family ... I think it's time that Gino really finds out how much the province of B.C. loved him.

Patt Quinn, who played for the Canucks during his days as an NHL defenceman and later coached the team, recalled Odjick's fierce style of play, but said, "Off the ice, you couldn't meet a more humble, big-hearted person."

"He's quite a man, and he's fought for everybody else for long enough. Now he's got to fight for himself, and I believe he'll do it."

'I will always be a Canuck'

Odjick, who is from Maniwaki, Que., was drafted by the Canucks in the fifth round, 86th overall, of the 1990 NHL draft.

"I feel very fortunate for the support I've received over the years," Odjick said. "During my career I played in some great NHL cities including Vancouver, Long Island, Philadelphia and Montreal.

"In my heart, I will always be a Canuck and I have always had a special relationship here with the fans."

Odjick said he was diagnosed with the disease two days after Pat Quinn was added to Rogers Arena's Ring of Honour in April, and he's been in hospital ever since.

Amyloidosis is a disease in which a waxy protein called amyloid builds up in organs and tissues and disrupts their normal function.

AL (Primary) amyloidosis is the most commonly diagnosed form of the disease.

When AL amyloid deposits are in the heart, as in Odjick’s case, the heart muscle's ability to relax is hampered so the organ’s ability to squeeze gets impaired, according to Stanford Hospital.

The rare disease has an estimated incidence of one to five cases per 100,000 people per year, Patient.co.uk said. About 1,200 to 3,200 new cases of amyloidosis are reported each year in the U.S.

The heart is involved in about half of patients with AL. When the organ is affected, worsening heart failure can occur, often without chest pain, the patient information service said. On ultrasound imaging, called echocardiography, the heart muscle often appears thickened from the amyloid deposits.