Stefan Lang of Flammkuchen Kuchi talks to CBC host Gloria Macarenko about the German pizza, which was first made 200 to 300 years ago. 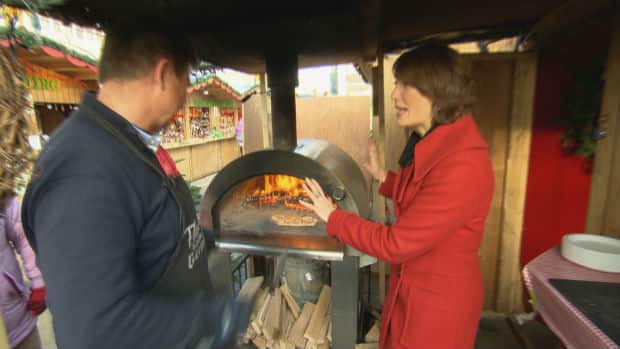 5 years agoVideo
2:24
Our Vancouver at the Christmas Market 2:24

German pizza — or flammkuchen —  is being cooked up at the Vancouver Christmas Market and its giving the better-known Italian kind a run for its money.

"This is actually older than the Italian pizza," said Stefan Lang, who sells the delicacy from the Flammkuchen Kuchi stall at the downtown market.

"They might hate me for that, but that's the truth."

Lang said the flammkuchen, which comes from the southwest Germany and the Alsace region of France, is so old that it comes from a time when there were hardly any tomatoes in Europe.

So rather than using tomato sauce for its base, the flammkuchen uses crème fraîche, a type of sour cream.

In the video above Lang demonstrates to CBC host Gloria Macarenko how flammkuchen is cooked in a wood fire, and explains its origins.