'They'll burn with their house': Behind the decision to defy evacuation orders as flames approach

In the small community of François Lake, which mostly relies on ferry service to get in and out, around 100 people are thought to be defying an evacuation order.

Packed in the gymnasium of Grassy Plains School, fire management specialist Dana Hicks addressed a crowd of 100 or so residents of the south side of François Lake, B.C., who have chosen not to obey an evacuation order.

The community, about 230 kilometres west of Prince George and just south of Burns Lake, is threatened by three fires: the Nadina Lake, Verdun Mountain and Island Lake fires, which combined cover more than 1,000 square kilometres

Close-ups of the active wildfire near Burns Lake, B.C. 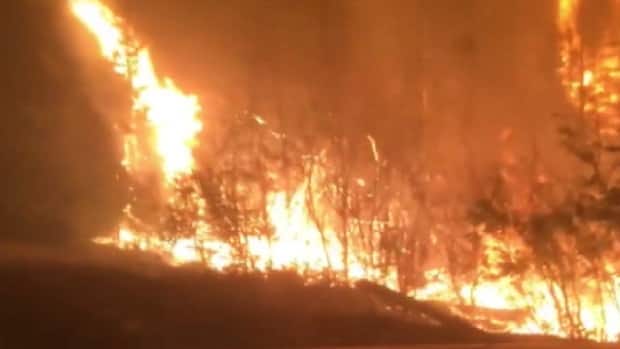 2 years agoVideo
0:30
Some residents in the area have chosen to defy an evacuation order, saying they'd rather stay behind and defend their homes. 0:30

Of the roughly 800 people who were told to leave Aug. 9, about 100 people have chosen to stay.

"I recognize that you're fighting for your livelihood and your dreams, and I understand that," Hicks said at the Monday meeting, pausing for emphasis.

"But helicopters, bulldozers — nothing will be able to save us if these fires start to move."

'We just can't afford to lose it'

As 560 wildfires burn throughout B.C., about 20,000 people have been ordered to leave their homes or be ready to leave at a moment's notice.

For some, the decision to flee might seem an obvious one.

But researchers who study wildfire evacuations say the decision can be wrenching — especially for those leaving behind property that contribute to livelihoods.

"We have so much stuff on our property that is of value, and we just can't afford to lose it," said resident Matthew Bock.

Still, the message from the province is clear: leave before it's too late.

"It may seem heroic or romantic to stay and fight a fire," Chris Duffy with Emergency Management B.C. told CBC in an interview.

"But I would suggest to you, and I was a front-line firefighter for 25 years, that there is nothing heroic or romantic about watching somebody that you love perish in a wildfire."

Duffy said provincial officials can't force a competent adult to leave an area unless a child is involved.

"At the end of the day though, if a competent adult decides to stay in defiance of an order, they can do that. We want to make sure that they clearly understand the risks that they have, and the risk that they're putting others in."

One of the people defying the evacuation order in the François Lake area is 25-year-old Jared Johnson. He works in the Cheslatta Carrier First Nation archives department, but has spent recent days hauling debris from buildings and sprinkling water on every house he can get to.

Johnson said he stayed behind because with hundreds of fires burning across the province, resources have been stretched thin, leaving the small community — which mostly relies on ferry service — feeling abandoned.

"The firefighters in the area are undermanned, they don't have enough people to fight these sizes of fires ... so we've been prepping all of our houses ourselves," he said.

Johnson said if the firefighters leave the area, he will too. But not everyone feels that way.

"There's some people that won't do it. They'll burn with their house down around them."

Amy Christianson, a fire research scientist at Natural Resources Canada, said many people feel that staying behind is a necessity rather than a choice.

"People stay behind to protect what they value the most," Christianson said.

In First Nations communities, that can mean staying to protect ceremonial sites, a berry-picking area, or a trapline. For people who are uninsured, or have livestock, it can mean protecting their entire livelihoods.

In Franç​ois Lake, some residents who planned to defy the evacuation order said if the fires escalate they will leave with firefighters.

But Christianson said experiences in Portugal and Australia, in which people died as they fled wildfires, have shown that staying until the end can be a dangerous choice — a message echoed by Hicks in his emergency meeting back at the school.

Hicks told residents that, if they do stay, it's safer to stay put for the duration of the wildfire.

'Not that easy to do'

Christianson said that while Canada uses evacuation orders as the main tool for keeping people safe, countries like Australia use a "shelter" or "stay-and-defend" approach, which can, in specific cases, be the smart thing to do.

Studies have shown that most buildings don't burn down because they are in the direct path of flames, but as a result of falling embers and burning limbs carried by wind.

She said in these conditions, with a plan in place, sufficient equipment and an understanding of fire behaviour, it may be possible to save your home.

"Preparedness would mean you have firefighting equipment, generators, access to a water source, personal protective equipment — it's not that easy to do."

Duffy, with Emergency Management B.C., said that even the best laid plans may fall apart when flames are approaching.

"I would offer that there is a difference between having the means and then having the knowledge and capability under duress and under extreme situations," he said.