The Real Estate Council of British Columbia has disciplined a former manager of MAC Marketing for his role in encouraging two employees to mislead the media and pose as buyers looking to invest in Vancouver's condo market. 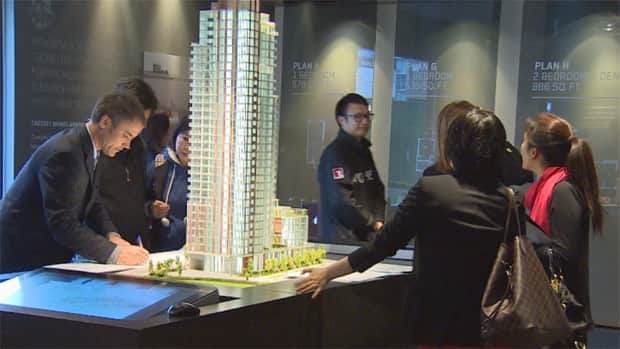 The Real Estate Council of British Columbia has disciplined a former manager of MAC Marketing for his role in encouraging employees to mislead the media.

The CBC's Matthew Black was the reporter they lied to in February 2013 at an open house for a condo development in downtown Vancouver.

CBC News was told two of the interested potential buyers in attendance were visiting from China and were looking to celebrate the Lunar New Year with a big purchase.

In reality the two women, who posed as sisters, were employees of Mac Marketing Solutions — the company hired to sell the condos.

After a local Vancouver blog uncovered the deception, MAC Marketing president Cameron McNeill admitted to the charade and promised a full investigation.

"We were not forthcoming to the media about their connection with MAC Marketing and we deeply regret that," McNeill said in February 2013.

This week, the Real Estate Council of B.C. released its ruling against Nicolas Hans Jensen, who worked for Onni Realty Inc. while licensed with MAC Marketing.

In the agreed statement of facts, Jensen admits to telling the two brokerage employees to act like customers. While he claims he never told them to lie, he also said he didn't intervene to stop them talking to reporters on camera.

Jensen resigned from the company days after the story aired and the deception was uncovered. With the REBC order, he now also faces a $1,250 fine, and a two-week licence suspension. He was also ordered to complete a remedial education course.

McNeill was out of town when CBC News tried to reach him after the decision was released, but he issued a written statement.

"This incident was a difficult learning experience and because of it, MAC integrated a combination of revised training and corporate governance measures so everyone on our staff clearly understands and adheres to our high standards," McNeill said.

Jensen, who is now working with another realty company in Vancouver, did not respond to requests for comment this weekend. His 14-day licence suspension begins next month.

Andrey Pavlov, a professor of finance at Simon Fraser University's Beedie School of Business, says the REBC's disciplinary action may not be enough of a deterrent to others, and that future claims condo selling success stories will continue to be viewed with skepticism.

"This is really a licence, or almost encouragement to do more because the downside is so little," Pavlov said.