A young Nanaimo woman and her parents are recovering from serious burns after flames from a fondue dinner sparked a house fire that quickly engulfed her downtown home on Christmas Eve. 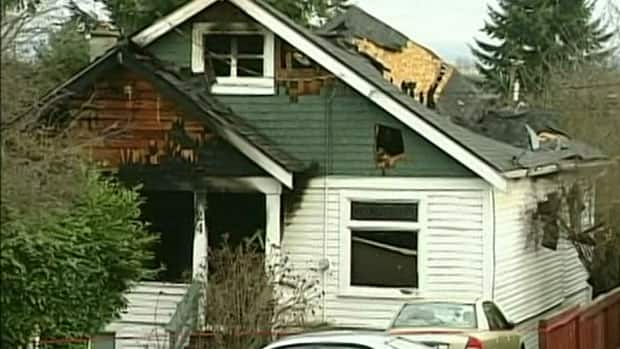 8 years agoVideo
2:05
A woman and her parents are recovering after fire tore through the Nanaimo, B.C., home 2:05

A young Nanaimo woman and her parents are recovering from serious burns after flames from a fondue dinner sparked a house fire that quickly engulfed her downtown home on Christmas Eve.

The 22-year-old woman, whose name has not been released, had just rented the main floor of the Machleary Street home, according to Ennis Mond of the Nanaimo Fire Department.

She and her parents — who were visiting from out of town — were gathered around the coffee table for their traditional Christmas Eve fondue, when the flame underneath one of the pots appeared to go out.

"The father figured the heater had gone out on one and went to refuel it, and basically had a flash fire," said Mond.

Before they knew it, the fire spread to the coffee table and the sofa, quickly getting out of control even as they tried to put water on it.

Then the Christmas tree went up in flames, so the father tried to drag it outside. But instead he burned his hands and only got the burning tree as far as the couch, further fueling the flames.

Neighbour Norman Gold just happen to look away from his TV to see the house erupt in flames.

"I happened to look out the window and saw the flames starting to come out of the house, out of the windows. The whole house just blew up."

Went back for pets and cellphone

The woman and her parents managed to escape to the street. The father had burned hands, but the women were okay, until they decided to go back into the burning building.

"The mother wanted her purse and cellphone. She returned inside to retrieve it and came out. The daughter went in to check on her pets and did not come out the front door because of the smoke and heat and fire in the living room, and ended up exiting out the back," said Mond.

The living room of the house and attic were destroyed by the flames. Two people in a basement suite were away at the time of the fire, leaving at least three people without a home on Christmas day.

Neighbours are reportedly collecting new furniture for them, because they don’t have insurance.