The increased concern about two deadly strains of the flu virus could lead to a shortage of vaccines this year in B.C., health officials have confirmed.

Concerns about 2 deadly flu strains have created increased demand for vaccine in B.C. 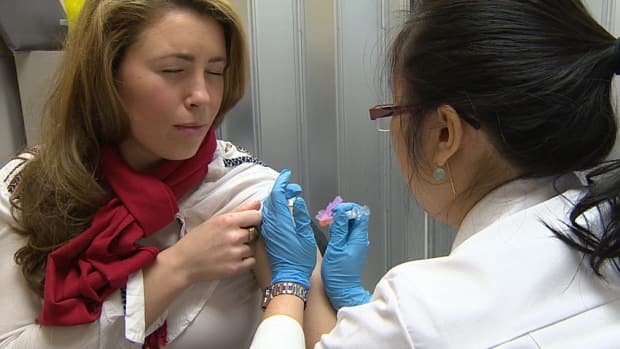 7 years ago
2:29
Many pharmacies are reporting shortages of season flu vaccines 2:29

The increased concern about two deadly strains of the flu virus could lead to a shortage of vaccines this year in B.C., health officials have confirmed.

People have been flocking to clinics and pharmacies to get the flu shot following reports that at least 12 people have died from the H1N1 strain this year in B.C. and Alberta, and hundreds of others are seriously ill. The H1N1 strain is particularly dangerous for young people who many not have immunity to the potentially fatal strain.

Then on Wednesday the federal Health Minister Rona Ambrose confirmed that one person who died from the deadly H5N1 bird flu strain on Jan. 3, had passed though Vancouver International Airport on his or her way from Beijing to Alberta.

Health officials note it is highly unlikely the H5N1 strain was passed on to other passengers who came in contact with the infected person, but the incident has heightened public concerns about the flu once again.

B.C.'s Provincial Health Officer Dr. Perry Kendall says there is no shortage of the flu vaccine at the present time, but noted if demand for the flu vaccine remains high, it could outpace supply this year.

"We order our vaccine back in February based on our best estimates of how much we can get into people's arms and the demand has been high this year," said Kendall on Wednesday.

"The vaccine supply is not inexhaustible. We have supplies available, but it's conceivable that if demand continues to be high, we will use up all of those 1.4 million doses."

Kendall says the remaining flu vaccines will be moved around the province to different areas as needed, but many pharmacies and clinics across the province are already reporting they have run out.

"There will not be enough, so individuals who want it...require it, need to go and get it as soon as they can," he said.

"There are still vaccines that are trickling through from a variety of sources that pharmacies can get a hold of, but...we will run out of vaccines."