A boat got its fishing line caught and was briefly towed by a ferry near Nanaimo, B.C.

A vessel got its fishing line caught and was briefly towed by a ferry near Nanaimo, B.C.

BC Ferries says a ferry snagged a partially submerged fishing net Wednesday in waters off Nanaimo.

Ferry corporation spokeswoman Deborah Marshall says the Queen of Alberni was travelling between the mainland and Duke Point, south of Nanaimo, when it caught a net near Entrance Island.

Marshall says about 75 boats were taking part in a fisheries opening in the area and although the captain slowed the ferry to ensure safe passage, one net was poorly marked and became fouled in the ship's propeller. 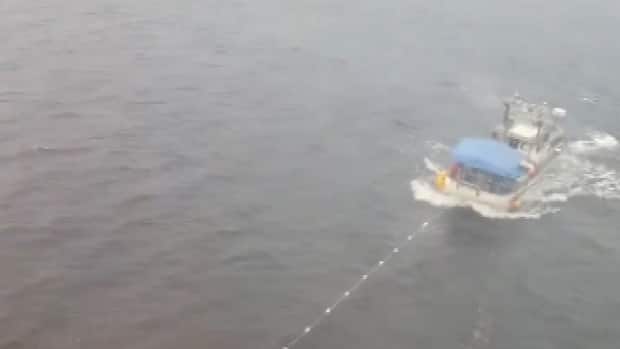 Fishing vessel gets pulled along by BC ferry

2 years ago
0:21
A vessel got its fishing line caught and was briefly towed by a ferry near Nanaimo, B.C. 0:21

No one was hurt and the propeller was not damaged, but Marshall says the small boat that set the net was towed backward by the ferry until the line between the boat and the net snapped.

She says the captain freed the remains of the net by reversing the ferry and the ship continued on to Nanaimo, about 20 minutes behind schedule.

Ferry travel lanes should not be obstructed and Marshall says the lanes past Entrance Island are clearly marked.

"We appreciate that (fishing crews) have a job to do, they are trying to make a living, but do stay clear of the ferry," she said.

Marshall said the Queen of Alberni also had a close call with another net and the ship had to be stopped.

The incidents prompted  a warning from Fisheries and Oceans Canada about the placement of nets.

Andrew Thomson, regional director of fisheries management, said Thursday the opening of the season that began Wednesday at 7 a.m. drew about 130 gillnet vessels, compared with 30 or 40 vessels that would typically show up.

He said that any further problems could prompt an early closure of the 13-hour-a-day fishery.

The opening is one of the few opportunities to fish for chum in the Strait of Georgia, Thomson said, adding the department has been advising the industry to steer clear of ferry lanes.

"I would say the compliance, as I understand it, is quite high but there is a large number of vessels and unfortunately some of the vessels are getting in the path (of ferries)," he said.

"If we cannot maintain a safe and orderly fishery, we will take steps to close the fishery."