A fire that began just before 6 a.m. PT in a south Vancouver sawmill has been brought under control.

Flames were through the roof when firefighters arrived

A major fire that began just before 6 a.m. PT in a south Vancouver sawmill has been brought under control.

Three workers at Mainland Sawmills on Yukon Street near Kent Avenue were treated at the scene for smoke inhalation.

Fire officials say upward of 70 employees were on the site when the blaze broke out.

Mill worker Parv Uppal said he could smell the smoke from blocks away when he was on his way to work this morning.

"The alarm was going off. People were running around, you could see flames," said Uppal.

He said employees that work overnight were luckily to get out alive.

"There was smoke everywhere. A couple of guys had to escape through the roof," he said. 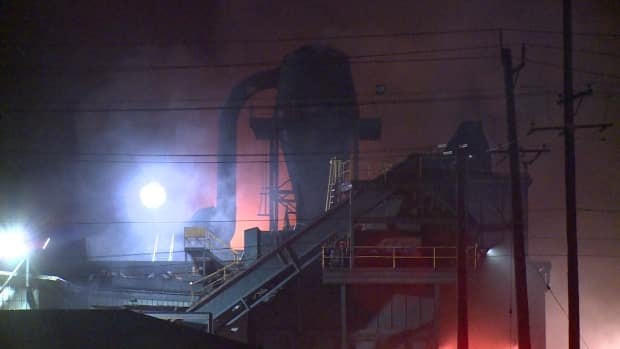 3 years ago
0:31
As many as 70 people were inside the sawmill when the blaze broke out, by the time firefighters arrived the fire was burning through the roof . 0:31

It quickly moved up through the centre of the mill to the third floor and was burning through the roof by the time firefighters arrived.

Wilson said firefighters had difficulty finding their way around the large mill because of heavy smoke.

"We fought the fire from different sides and had multiple interior attack crews," he said.

Wilson said there were concerns due to multiple oil and grease reservoirs on site.

"We were worried, environmentally, if that got down into the river [there] would be an explosion and environmental damage."

Fireboats were also brought in to get at the fire from the Fraser River.

Wilson said there is extensive damage to multiple areas of the mill's interior.

A crane tower in the mill is of particular concern due to an extreme potential for collapse.

t's not yet known when or if employees of the mill will be able to return to work.

"Who knows, but everybody is out of work right now," said Corey Casselmen, who has been working at the mill for a few months.

Thick grey smoke continues to pour out of this building. As it gets lighter out you can see the flames. <a href="https://t.co/ofbcE3ia0B">pic.twitter.com/ofbcE3ia0B</a>

With files from GP Mendoza and Farrah Merali