Experts weigh-in on what effect cutting off illegal fentanyl supplies into B.C. could have on the current opioid crisis.

It weighed only 1.45 kilograms, but the international parcel destined for Victoria could have killed 725,000 people.

The package contained the potent street drug fentanyl and it was just one of many similar shipments intercepted by police across Canada.

Authorities said it came from China, a country labelled by experts worldwide as the leading culprit in fentanyl manufacturing and export.

"There have been [federal] efforts opened up with China as a source country to deal with fentanyl," said Clayton Pecknold, B.C. director of police services ,

"I'd like to see continued diplomatic efforts, frankly, to support our efforts here in B.C. I'm hoping that will result in some reduction in the supply."

So could curbing illegal exports of synthetic opioids solve the fentanyl crisis in British Columbia? 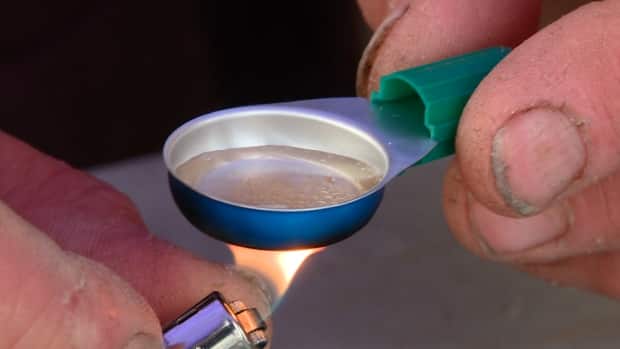 How does fentanyl get into Canada?

4 years agoVideo
3:00
China is the main source of fentanyl in Canada. In CBC's Fentanyl Fix series, we look at ideas of how to cut off the supply. 3:00

Why China is in the lead

But first, let's take a quick look at why China is ground zero for fentanyl exports.

Nicholas Li, assistant professor of economics at the University of Toronto, says there are three contributing factors.

The first is that China already supplies legal sources of fentanyl to countries like Canada — although it only supplies about one per cent of Canada's $1.4 billion pharmaceutical imports.

What's more likely the issue, according to Li, is the fragmented structure of China's pharmaceutical market, which is made up of thousands of small companies.

"These Chinese pharmaceutical companies are not necessarily innovative world leaders, they're just producing generic or other drugs at lower costs," Li said.

The competition for scarce profits can encourage companies to sell their otherwise legal products on the black market, or turn a blind eye to middlemen who do it for them.

The third factor is Canada's economic and social ties with China, which creates ample opportunities for small packages to get smuggled into country through shipping routes or via the thousands of visitors to B.C. each year.

Past international efforts to control fentanyl abuse have been successful.

Fentanyl first hit the streets in the 70s, shortly after it became a legal substance for pain treatment.

Back then, international agreements were developed to define and trade fentanyl and its derivatives strictly as medical substances, which did quell the crisis at the time.

But Raithelhuber says today the problem is more complex.

Fentanyl analogs — substances with a similar chemical structure — have now taken hold of the illicit drug market as well.

New supply routes increasingly involve the ease and accessibility of the internet, where small but deadly amounts of fentanyl are only a few clicks away.

But health professionals say the problem isn't one of supply so much as one of demand fuelled by a lack of treatment options.

According to a 2013 report from UBC's Urban Health Research Institute, reducing illicit drug supply through law enforcement doesn't affect drug use levels — but harm reduction does.

"The best strategy is to expand evidence-based addiction treatments to reduce demand for drugs and reduce the size of the drug market," wrote Dr. Evan Wood, the report's co-author..

It's a message even law enforcement officials, including B.C. director of police services Clayton Pecknold, seem to agree with.

"We're not going to solve this crisis by arresting our way out of it or seizing at the border," Pecknold said.

"It's one component ... but the broader response is a health response, an education response and a coordinated response at all levels of government."