Fawns on the lawn: Deer gives birth to twins on campus quad — again

For the third year in a row, a deer has given birth to twin fawns in a campus courtyard at the University of Northern B.C. in Prince George.

For 3rd year in a row, deer delivers at Prince George campus in northern B.C.

A pregnant deer has given birth to twin fawns by the campus quad of the University of Northern British Columbia in Prince George.

"We saw  [the doe] in the courtyard in labour. You can tell she was having contractions. And then ... she went into the trees to gave birth," said Sianne Vautour,  a lab animal attendant at UNBC.

'We did see the babies stand up. It was twins'

"We couldn't actually see her give birth, but then we did see the babies stand up," she said.  "It was twins again."

It's the third year in a row the doe has given birth on campus. And Vautour has nicknamed her June, for the month in which she routinely appears.

Animals are not uncommon at the university, which backs onto thick forest. Moose and bears sometimes cause problems on campus. But the deer is a welcome visitor. 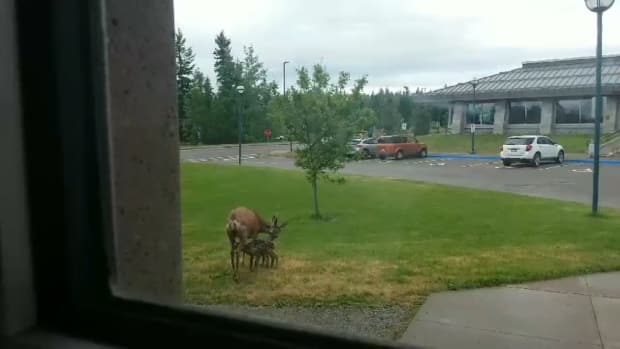 1 year ago
0:39
A female deer nudges her newborn offspring on the campus of UNBC in Prince George this week. 0:39

"It's cool she trusts us so much and knows that she's safe," said Vautour. "She has a lot of eyes on her and it doesn't faze her at all."

'It's cool she trusts us'

The fawns are so well camouflaged in their surroundings, Vautour said, they look like rocks in the grass. Fawns are biologically wired to lie low and spend most of their time away from their mother. The female deer stay away because their scent attracts predators.

Vautour said the doe has been leaving the fawns alone while she forages on campus for several hours at a time.

"She was just wandering around the university," said Vautour, "and then she just came back and checked on them, once they were done with their nap."

"It's really awesome. We all love her," said Vautour.

With files from Matt Allen