Bystander video appears to show a security guard at the Valley Centre in Lynn Valley punching and spitting on a 15-year-old girl.

A video shot outside the Valley Centre McDonald's in North Vancouver appears to show a security guard punching and spitting on a teenage girl.

According to the girl's father, Dillan Simard, the video was taken Thursday around 4:30 in the afternoon.

Simard says he has contacted police and wants the guard to be charged with assault. 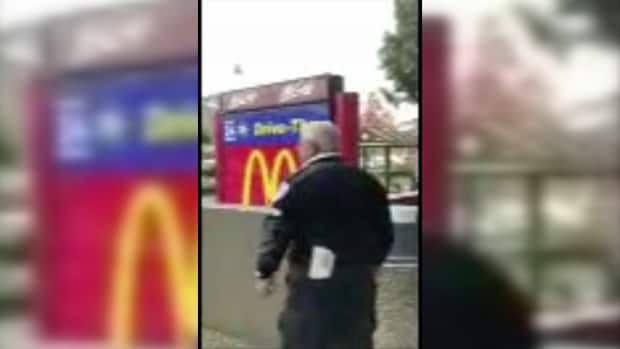 1 year ago
0:21
Bystander video appears to show security guard at the Valley Centre in North Vancouver punching and spitting on a girl. 0:21

The owner of the company that manages Valley Centre says the security guard works for a contracted company.

Dale Mumford of SDM Realty Advisor said he had not seen the video.

"We've had issues with kids at the property and we're dealing with the RCMP on it," said Mumford.

Simard said his daughter and four friends went into the Valley Centre to look for another girl they thought was at the McDonald's. He said the altercation started earlier than the video shows and escalated when the guard allegedly pushed his daughter out the door.

In the video, the girls can be heard yelling profanities at the guard.

The guard can be heard saying, "I'm calling the cops."

North Vancouver RCMP confirm they have received the video and a complaint and are investigating.