A Look Back at Expo '86 and its architectural legacy

Bruno Freschi, the chief architect of Vancouver's Expo '86, talks about the fair, the challenges he ran into along the way and the legacy it left behind. 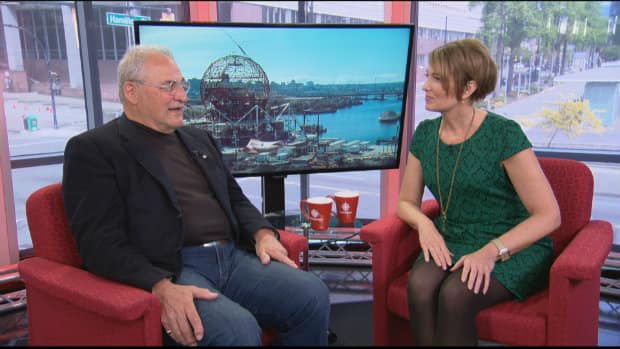 4 years ago
6:14
Bruno Freschi describes how False Creek was transformed forever by the fair 6:14

It was thirty years ago this May that Vancouver hosted Expo '86 — a World Fair with the theme of transportation and communication — and the chief architect of the fair made sure that it would leave behind a legacy on the land where it took place.

"I had lessons from history: the Paris that you and I love was created by the success of World's Fairs," Bruno Freschi told Our Vancouver host Gloria Macarenko.

"There were some people that wanted to go suburban out to Abbotsford or down to Delta and I fought that. I got False Creek together. That was the first big decision — to put it urban, not suburban."

According to Freschi, at the time there had been a tendency in many cities that held fairs to put them in suburban centres.

For Vancouver's fair they looked to neighbouring city Seattle for inspiration, and saw how the city benefited from the World's Fair being held there in 1962.

As the chief architect for the project Freschi, was responsible for finding the right site, making sure the Bureau of International Expositions was happy and inspiring others.

"The job is to inspire everyone else and one of the dimensions of inspiration was the legacy I did. And among the legacies are Canada Place, Science World ... the Roundhouse and the transit system ."

Freschi says the fair's theme of transportation and communication got the federal government involved with the creation of the Skytrain's Expo Line. There were many interpretations of the theme which was originally called Transpo '86.

"It evolved and evolved and everybody had a broader and broader concept of what that was — so it became Expo instead of Transpo," said Freschi.

One of the challenges of the fair was fighting back the theme park mentality that goes along with fairs and holding onto the World's Fair vision, said Freschi,

"There were people who believed that the Disney model theme park was the answer and World Fairs are theme parks but, they are much more than that. We did not do a throw-away fair. It was a reusable set of buildings."

Freschi says the fair changed how Vancouverites operate and the fair's legacy continues to change the city.

"It was a public ritual ... of public life ... in a public place without all the usual incompetence of traffic and all of that. So, people and a lot of them came ... really loved that freedom and that legacy I think is what is changing Vancouver now," he said.

"I'm looking out at the empty plaza at the Queen Elizabeth theatre ... you know that's absurd, that should never be like that; Where as there are other places at the art gallery that are crowded and full of life and so on ... so we're becoming a city of that."

In the video above, Freschi tells Our Vancouver host Gloria Macarenko about what it was like being the chief architect of Expo '86 and his favourite memory from the fair.