Thirty years after Expo 86, Vancouverites still enjoy many of the benefits leftover from the fair, But the fair also has a darker legacy.

Thirty years after Expo 86, Vancouverites still enjoy many of the benefits leftover from the fair including iconic buildings like Science World and Canada Place, as well as infrastructure like the SkyTrain and Cambie Street Bridge, but the fair also has a dark legacy.

In the months leading up to the fair, more than a thousand low income residents in the city's Downtown Eastside were forced from their homes — single room occupancy hotels, or SROs — many with little more than a day or week's notice.

"That was the negative. That was the one negative," said former B.C. premier Mike Harcourt, who was Vancouver's mayor from 1980 to 1986.

Harcourt had several misgivings about Expo in the years it was being planned, but his concerns about who would ultimately cover the cost, issues with the transportation system, security plans and what would happen to the Expo grounds after the fair, were all resolved to his satisfaction.

Only his concerns over the dislocation of hundreds of long-term tenants from Downtown Eastside hotels to make way for crowds of visitors would be ignored by the provincial government, he said.

Stephen Learey was working for the Downtown Eastside Residents Association (DERA) during that time, and for him, the Expo experience was entirely negative.

"For me there's not a bit of pleasure. There's no pleasure whatsoever," he said. "I never went to Expo, so I never went inside the gates."

Learey and others at DERA were struggling to get the provincial laws changed, so that long-term SRO tenants would be covered under the rules governing landlords and tenants, rather than the Innkeeper's Act, which didn't require formal eviction notice.

"Basically, someone could find out at noon that they had to be out a four o'clock. There didn't have to be written notice, it could be verbal notice," said Learey.

Harcourt also wanted the laws changed to protect the tenants who were being forced out of hotels as landlords anticipated a windfall from the millions of visitors that were coming to Vancouver. 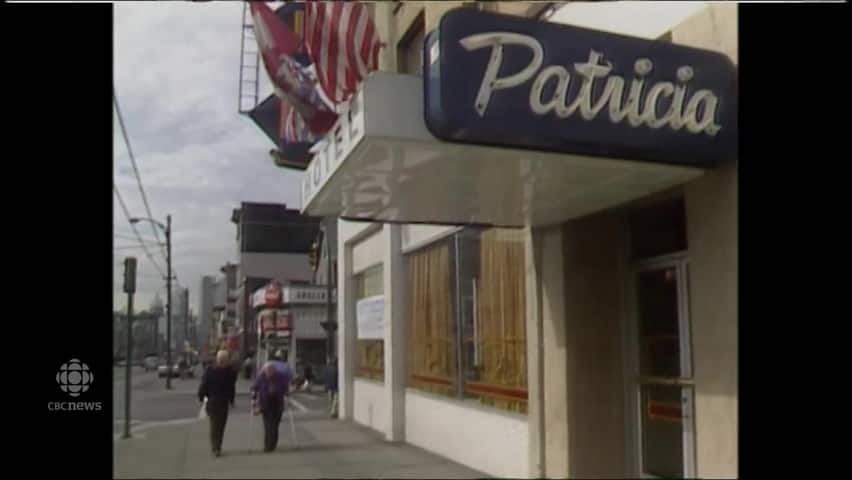 "I was very upset about it. I said publicly to the premier that he could have been a hero by doing that. Instead, he was a bum by having these poor souls dislocated and their health hurt quite dramatically," said Harcourt.

Another person working with DERA during Expo was John Shayler. He said the group anticipated evictions, because they'd watched what had happened at the previous World's Fair in Knoxville four years earlier.

"My experience was pretty grim, because in the run up to Expo — the dam, literally, burst," he said.

"We had — probably from February 1986 through March and in the beginning of April — that's when about 800 to 1,000 evictions happened, and they happened very fast," said Shayler.

When the evictions started happening, the City of Vancouver hired Learey to relocate people. He estimates he personally helped about 300 people find new places.

'It was just chaotic'

"It was just chaotic. People would come in and say, 'I've been told I have to get out of my place. I'm not sure where I should go. Where am I going to sleep tonight?'" Learey said.

One case became famous after a Norwegian man named Olaf Solheim, who had lived at the Patricia Hotel for decades, was forced out.

"Everyone knew Olaf, he used to have candies in his pockets," said Learey.

"We had found him a nice place. It was a self contained unit. It was brand new. We moved him over there and set him up with Meals on Wheels. He had a kitchen and everything, but he was pretty despondent about it all," he said.

Over the next three weeks, Solheim stopped eating and died.

"He'd been moved from where he was to a place he didn't want to be, and he simply lost his will to live and he died," said Dr. John Blatherwick, who was Vancouver's chief medical health officer at the time.

'He died of a broken heart'

"I get the coroner's report," said Blatherwick. "I don't remember the exact words, but they were close enough that I told the press, 'He died of a broken heart.'"

Learey and Shayler estimate that several other deaths resulted from the evictions — some by suicide, some for other medical reasons, but Solheim's was the only one that was directly linked to the evictions by officials.

"We were tearing apart a fabric of it, and what I was angry about was people saying this is okay," said Blatherwick. "People do give up."

Many of the displaced Downtown Eastside residents eventually made their way back in the year or two after Expo 86, according to Blatherwick — some to rooms that actually did get minor upgrades. The laws also changed a couple years later to give long-term SRO tenants protections.

"I guess in some ways, you have to remember the good things," said Blatherwick, who thoroughly enjoyed the fair, even buying season passes for his family.

"But you also have to remind people that there are consequences to almost anything you do and it had some consequence on the most downtrodden demographic."