More than 300 properties evacuated, thousands on alert as wildfire grows in B.C.'s Okanagan

An evacuation order has been issued for residents of 319 properties near a quickly growing wildfire that broke out Tuesday afternoon north of Okanagan Falls, B.C., while residents of thousands of homes in Penticton have been put on notice.

An evacuation order has been issued for residents of 319 properties near a quickly growing wildfire that broke out Tuesday afternoon north of Okanagan Falls, B.C., while residents of thousands of homes in Penticton — about 12 kilometres north of the blaze — have been put on notice.

Residents of the Heritage Hills area  north of Okanagan Falls were ordered to leave by the Regional District of Okanagan-Similkameen at around 4:30 p.m. PT.

Later the same evening, residents of another 3,669 properties in southeast Penticton, 116 properties in Penticton's Upper Carmi area and one home north of Heritage Hills have also been placed on evacuation alert and have been told to be ready to leave if the situation worsens.

John Green was among those evacuated Tuesday night, and he told The Canadian Press that experience with previous wildfire seasons meant he was prepared with emergency boxes ready.

"We were very thankful we didn't have forest fires this year on top of COVID, so this is pretty devastating for most people and especially people who are a lot closer to where their houses may be in danger,'' he said.

The Christie Mountain wildfire was sparked Tuesday about six kilometres north of Okanagan Falls on the east side of Skaha Lake, growing from about four hectares as of 4 p.m. PT to 250 hectares two hours later, according to the B.C. Wildfire Service.

By 10 p.m., the blaze had quadrupled in size to 1,000 hectares and was still burning out of control.

Fire information officer Nicole Bonnett said the fire is generating a large amount of smoke, which has made it difficult to estimate the size of the blaze.

"I'm sure we'll see some more growth as this smoke continues to move around," Bonnett said. "It's burning in a pretty rocky, sloping area, and fire tends to burn uphill fairly quickly."

The cause is still under investigation. Air tankers were on scene late Tuesday afternoon, dropping retardant on the flames, and 21 firefighters were set to remain on scene overnight. 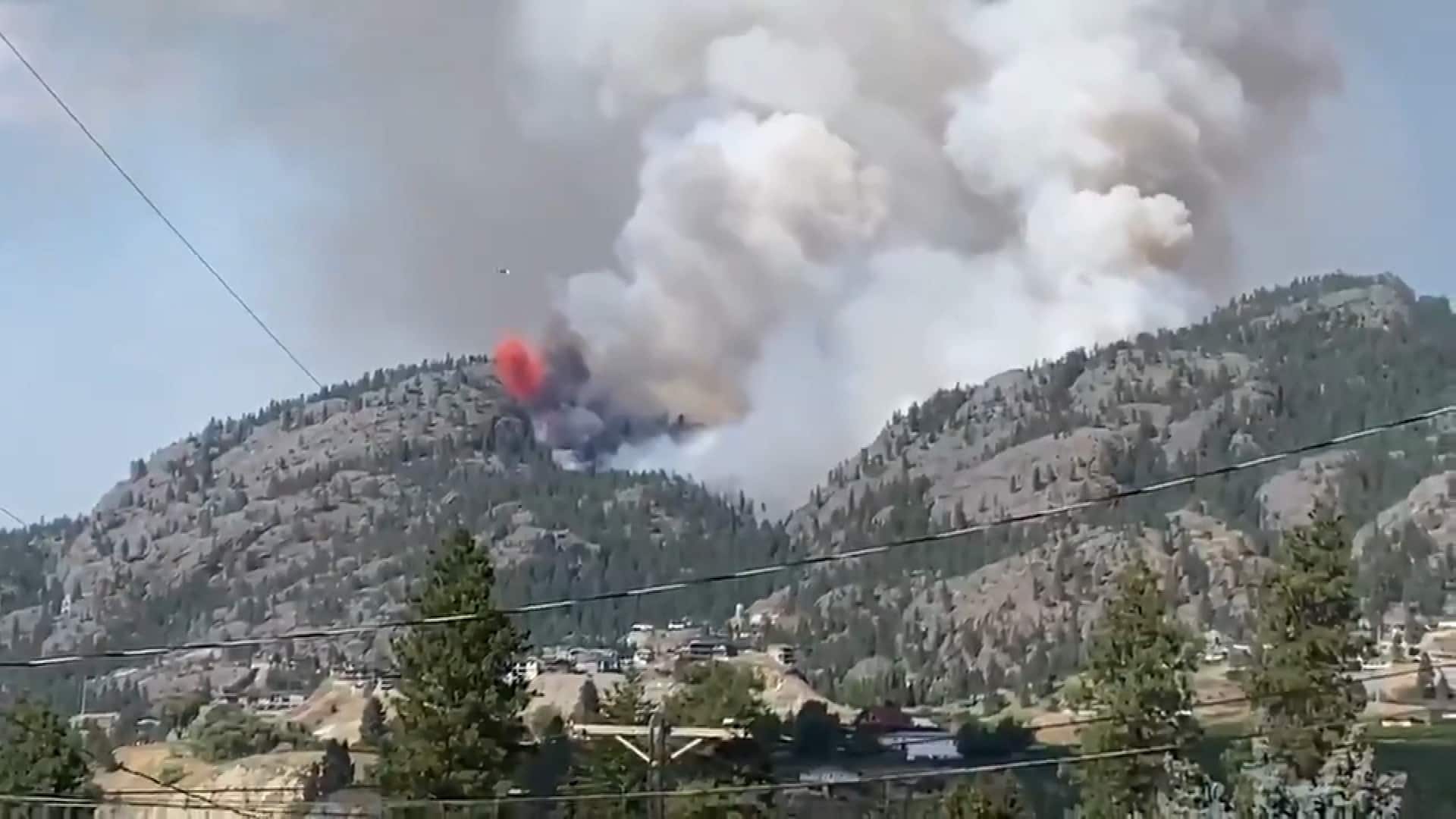 2 months ago
0:47
Retardant is dropped from the air on a wildfire in the south Okanagan on Tuesday afternoon. 0:47

"With these dry conditions, especially with any wind in the area, it can move very quickly. Crews are definitely out in full force," Thompson told CBC.

Those affected by the evacuation order have been told been told to leave the area immediately and register in Penticton at 199 Ellis St.

The fire comes at a busy time for B.C. firefighters following a fire season that has otherwise developed very slowly. Dozens of fires were also sparked by a lightning storm Sunday night.

Figures from the service show that among 109 active fires in the province, 95 were started in the last few days.