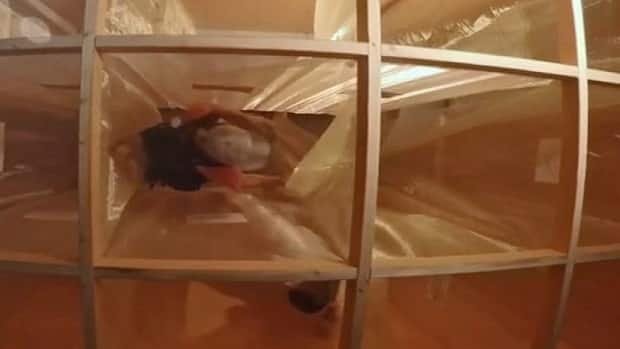 Escape room shows some of the challenges homeless people face

3 years ago
1:25
Union Gospel Mission designed the space with people who were formerly homeless 1:25

As part of Metro Vancouver's Homelessness Action Week, Union Gospel Mission is trying to show the public how difficult it is to escape homelessness.

"There are innumerable obstacles and barriers that pop up that keep our homeless British Columbians on the street," said Jeremy Hunka, spokesperson for Union Gospel Mission.

A recent report found that there are 4,211 homeless people across B.C.'s Lower Mainland.

To illustrate the hurdles faced by homeless people, the charity has designed an installation based on the popular escape room games, in which participants solve a series of puzzles to escape from an enclosed space.

In the Union Gospel Mission's design, participants must make it out of four rooms — one for each season — and navigate through barriers such as finding housing, filling up paperwork without proper prescription glasses and juggling various agencies while faced with the unexpected.

"If you haven't been homeless you will never really know what it is like," said Hunka.

"This will at least give a glimpse of what that is like and you will encounter homelessness in a new way and it will change your perception," he said.

The room was designed and built with the help of several former homeless people, including Terry Lawrence.

"I want people to understand it's not a choice to be homeless," Lawrence said. "It's a combination of a lot of things in your life that come together to cause it."

Lawrence became homeless after he was evicted from his apartment when it was renovated. The next place he had lined up burned down.

Lawrence also has severe social anxiety, which prevented him from navigating the available resources to find another home, and he wound up on the street.

"I went through this whole maze. It was dead end after dead end," he said of a day when he tried to go through several agencies in the Downtown Eastside.

At each office he was told someone was away, sick or he had to come back at a later time.

"You're always hitting something, and it's not always obvious," he said.

The escape room is free and runs from Oct 7 to 14, except for Thanksgiving at the Exit Canada Richmond location. Participants can register at: http://ugm.ca/encounter.