Erin Baerwald says it's a blessing to have bats in your house, as their poop makes good fertilizer and they feed on insects.

Prof. Erin Baerwald actively sought out a house with bats to live in when she moved to Prince George, B.C.

For wildlife enthusiast Erin Baerwald, bats aren't spooky animals to be scared of during Halloween — instead, they're adorable creatures that she wants to live with.

The biology professor at the University of Northern British Columbia in Prince George leads a team of researchers studying the migratory behaviour of North American bats.

So she's naturally excited that it's International Bat Week, an annual event created to raise awareness about conservation of the animals.

When she moved to the city, Baerwald says she actively sought a house with bats in it to live in.

"One of the first things I did was walk around the perimeter of the house, kind of look[ing] at the attic, look[ing] for any evidence of bats," Baerwald told CBC's Daybreak North host Carolina de Ryk on Tuesday.

Baerwald says it's a blessing to have bats on your property, as their poop makes good fertilizer and they feed on insects.

She recommends people with bats at home to use plastic sheeting to collect their droppings in the area where they roost.

"It's a really good fertilizer," she said. "You can use it for your plants and just put it in directly."

"They're one of the primary predators for insect pests," she said. "They eat all of those insect pests and reduce the amount of pesticides we need, so they're incredibly important for the ecosystem."

She said bats have a bad reputation because they are falsely thought of as carrying disease, when the reality is they are quite clean.

For example where there is a small risk of rabies, there are very few instances of people actually being infected by bats each year. She also said early research indicates bats found in B.C. cannot spread COVID-19 to humans, as had previously been feared.

"They are pretty clean and healthy and helpful critters," she said.

One fascinating fact about bats, Baerwald says, is that they can sing just like birds — and how they sing varies from region to region.

"Some birds have dialects … they have accents, and that sounds slightly different in different places," she said.

Baerwald says bats across the continent, including the big brown bats prevalent in central and northern B.C., are being endangered by white nose syndrome.

The fungal disease affects bats' noses when they hibernate and has killed more than six million bats in Canada and the United States since 2006, according to Bat Conservation International, the non-profit based in Austin, Texas, that created International Bat Week.

Baerwald says bats can live as long as 46 years and can can live in the same space for decades.

If you're not comfortable with the flying mammals in your house, she suggests looking for the "nooks and crannies" where they enter and leave, waiting until the bats disperse in the fall, and closing up those gaps. 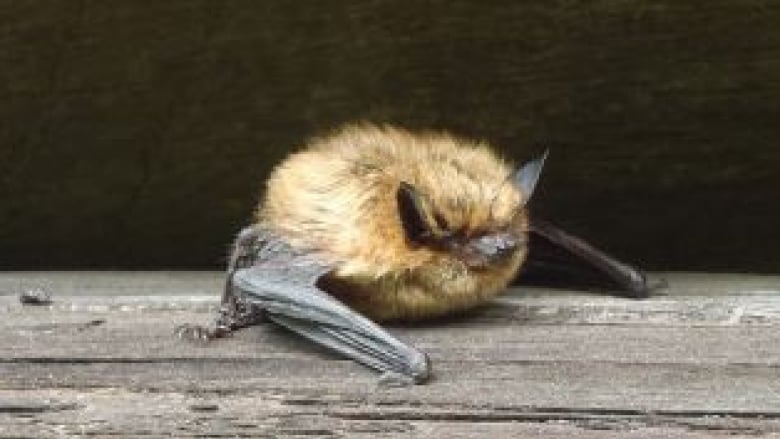 Daybreak North9:45Shimmering bat poop
For International Bat Week, UNBC's Erin Baewald tells us some surprising reasons you should love the flying mammals - including fun facts about their guano.

Winston Szeto is a journalist with CBC News based in Kelowna, B.C. in the unceded territories of the Syilx. He writes stories about new immigrants and LGBTQ communities. He has contributed to CBC investigative journalism programs Marketplace and The Fifth Estate. Winston speaks Cantonese and Mandarin fluently and has a working knowledge of German and Japanese. He came to Canada in 2018 from Hong Kong, and is proud to be Canadian. Send him tips at winston.szeto@cbc.ca.