The former Conservative member of parliament has promised, on her platform, to tear up or cancel several key cycling routes, undertake a review of all separated bike lanes and “end the ideological war on transportation with NO new bike lanes.” 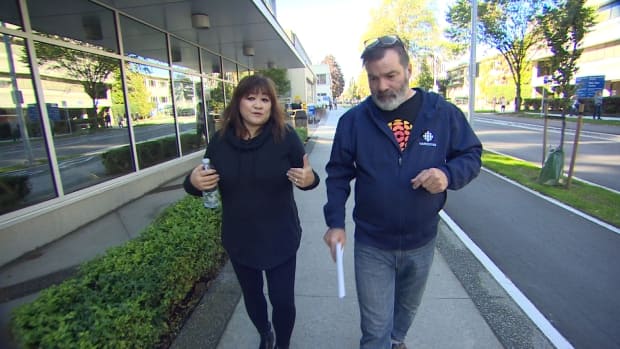 It's likely no Vancouver mayoral hopeful has more to say on the subject of bike lanes than Wai Young.

The former Conservative MP has promised, on her platform, to tear up or cancel several key cycling routes, undertake a review of all separated bike lanes and "end the ideological war on transportation with NO new bike lanes."

"It's a luxurious road system built for a select few and I don't think it's necessary," Young told The Early Edition host Stephen Quinn.

Every week until the vote on Oct. 20, Quinn has saddled up for a bike ride with a different mayoral candidate to get to know them and their policies a little better.

This week, he met up with Young, the Coalition Vancouver candidate. However, due a knee injury, she was unable to ride a bike, and they went for a stroll instead.

Bike lanes aren't the only facet of Vancouver's roads Young would change if elected.

She says she will put a halt to any plans to tear down the viaducts connecting False Creek with downtown.

She believes that move will save taxpayers $4.5 billion although the City of Vancouver's latest numbers on the plan to tear them down finds it will only cost $1.7 billion — including the construction of amenities like child-care spaces, social housing and parks where the elevated roads once stood.

When Quinn pressed her on this discrepancy, Young said she had read a different report from "very credible" people, who she was unable to immediately name.

On housing, Young believes the city needs to stop selling city land. Her platform calls for tax and zoning measures to encourage the construction of purpose-built rental housing and affordable housing.

She is also proposing a private-public system where small units costing approximately $300,000 will be built for sale to people trying to get into the housing market.

With files from CBC Radio One's The Early Edition