B.C.'s director of civil forfeiture wants to keep more than $3 million in cash allegedly found stashed in the subsidized home of a retiree who police claim has links to Australia's biggest drug bust.

B.C.'s director of civil forfeiture wants to keep more than $3 million in cash allegedly found stashed in the subsidized home of a retiree who police claim has links to Australia's biggest drug bust.

According to a notice of civil claim filed in B.C. Supreme Court, Rolando Guajardo has no criminal record in Canada and lives in a low-income townhome at the foot of Burnaby Mountain.

Yet RCMP allegedly found $3,227,340 in Canadian currency tightly bundled in boxes and bags spread around the bedrooms of the residence the 69-year-old shares with his daughter when they raided the home in February after a months-long, multi-agency international investigation.

"Mr. Guajardo's [residence] is subsidized housing owned by the Metro Vancouver Housing Corporation, and his current employment is believed to be 'retired' and previous employment 'self-employed,'" the notice of claim reads.

'A block of white powder'

Guajardo is not facing any criminal charges in connection with the seizure of the money or the Australian police investigation that led to the arrest of six people in that country earlier this year.

His lawyer made a brief appearance in Vancouver provincial court on Thursday. The Crown and defence reached an agreement with regards to items and vehicles seized from locations tied to Guajardo in February. 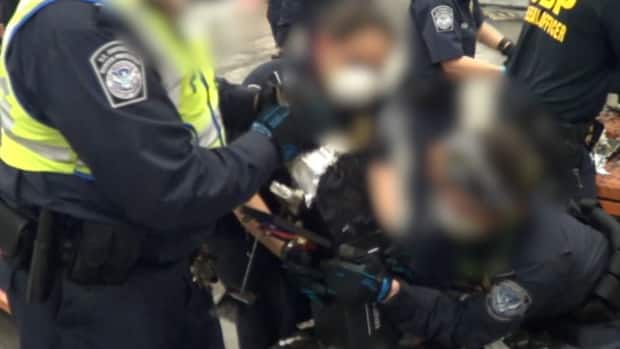 B.C.'s Civil Forfeiture Act allows the province to file suit against property linked to unlawful activity, regardless of whether or not a person has been convicted or even charged with a crime. To win, the director of civil forfeiture has to establish that the property in question is either the proceeds of crime or an instrument of unlawful activity.

According to the B.C. Supreme Court documents, the civil forfeiture claim against both Guajardo and his daughter is the latest chapter in a story that began in June 2018 when Guajardo and another man were questioned as they attempted to fly out of Australia.

"During an inspection, [Australian Border Police] officers located two photographs on Mr. Guajardo's cellphone of a vacuum-sealed bag containing a block of white powder believed to be cocaine," the lawsuit reads.

Metadata allegedly indicated the picture had been taken at the subsidized townhome in Burnaby the previous month.

Guajardo claimed he had been staying in Australia with a friend, Abo Abdo, owner of a California-based car-speaker business named Audiobahn.

According to the civil suit, the two men were observed at the U.S. business in early January, "where they remained until late in the evening moving boxes and pallets."

Abo Abdo then lodged an export document with a broker to ship nearly 1,800 speaker units to Australia. A few days later, an undercover agent working with the U.S. Department of Homeland Security picked up the cargo.

A search of the containers found 1,728 kilograms of methamphetamine, 25 kilograms of cocaine and five kilograms of heroin hidden inside 850 of the speaker units.

The drugs were seized, but the containers were allowed to continue to Australia, where police lay in wait.

The arrests of Abo Abdo and his wife, Leonor Fajardo, made for big news in Australia when they were announced in February.

Police in B.C. simultaneously raided homes attached to Guajardo and his girlfriend, Rosa Fajardo, who is Leonor Fajardo's sister.

Police allegedly found more than $3 million in bundles of cash tucked away in plastic bags, sports bags and boxes.

The court documents claim much of the money was stuffed under beds, including:

The search warrants issued to RCMP in February were sealed, but one is attached as an appendix to a publicly available search warrant filed in Surrey provincial court.

CBC has obtained a copy of that document.

According to the warrant, Australian police intercepted communications between Abo Abdo and his wife in which Guajardo was referred to as Tio — Spanish for uncle — or as The Old Man.

Abo Abdo allegedly claimed "Guajardo referenced that people didn't know how to send drugs anymore and that the system they have was very professional."

RCMP also searched four vehicles belonging to Guajardo and allegedly found after-market compartments, one of which was lined with a lead sheet "believed to be used for avoidance of detection during an X-ray process."

He was also allegedly flagged by FINTRAC — the Financial Transactions and Reports Analysis Centre of Canada — four times in 2018 for depositing more than $10,000 in a personal bank account and is allegedly the subject of suspicious transactions totalling $60,000 U.S. at Palm Springs, Calif., casinos.

The civil suit claims the money and belongings are proceeds and instruments of unlawful activity.

Metro Vancouver would not comment on the civil claim or Guajardo's tenancy in low-income housing due to privacy and confidentiality considerations.

But a spokesperson said Metro Vancouver has "strict criteria for tenants residing in subsidized and low-end of market housing."

Guajardo has not filed a reply to the B.C. Supreme Court lawsuit. None of the allegations have been proven in court.