A pharmaceutical retailer that opened in Vancouver in the 1940s is testing drones as a new method of prescription drug delivery.

Soon, that buzz in the sky could be life-saving medication.

A century after the first piece of regular mail was delivered by airplane, Canada Post and London Drugs are partnering to test drones as a new method of prescription drug delivery.

It's being touted as an innovative solution to get much-needed meds to remote patients.

The pharmaceutical retailer in co-operation with Canada Post and robotics company InDro Robotics launched a tiny test flight on Aug. 19.

A drone carrying an emergency EpiPen and Narcan spray flew the six kilometres from Duncan to Salt Spring Island in 11 minutes, according to B.C.-based London Drugs.

It says this is the first beyond visual line-of-sight (BVLOS) flight that has delivered drugs in Canada and required a special licence, as the person piloting the drone could not actually see it. 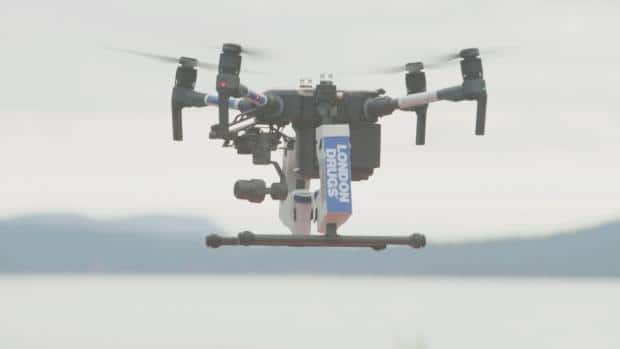 1 year agoVideo
0:43
This drone flew 6 kilometres over open water from Duncan to Salt Spring Island in 11 minutes with life-saving meds on board. It was a test of prescription drug delivery coordinated by London Drugs, Canada Post and a robotics company. In one trial prescription was flown directly to a patient’s home. 0:43

It was part of a pilot program the company hopes results in a new way to serve remote clients who may not live near pharmacies. The service is not yet available to customers.

Chris Chiew, the general manager of pharmacy for London Drugs, says he was surprised it hadn't been tried before — until he understood the rigorous Transport Canada regulations governing this type of flight, with no human pilot to deal with unforeseen circumstances.

"Now, going through the process, I see why everybody had to be so careful," said Chiew.

No narcotics will be transported by drone. But other drugs like blood pressure medication or emergency opioid reversal medications — could be made available this way, he said.

"Watching it was absolutely phenomenal to see the reality come to life," said Chiew.

On Aug. 19, the drone had no trouble lifting and delivering the weight of an EpiPen loaded with epinephrine and a naloxone kit, which includes medication used to reverse the potentially deadly effects of an opioid overdose.

"We were really comfortable to see [the drone] fly off with the medication," Chiew said.

The drone successfully delivered its load to the Country Grocer on Salt Spring Island, and in another trial, directly to a would-be patient's home.

The drone-delivered drugs come 101 years after the first letter was delivered by air in Canada.

"This is one of the many innovations Canada Post continues to work on to enhance the service we provide to Canadians — no matter where they live," Jaime Gomes, project lead for Canada Post, wrote to CBC.