The suspected impaired driver involved in a Surrey traffic fatality Tuesday has been fired from her job for driving a company vehicle involved in the accident without authorization. 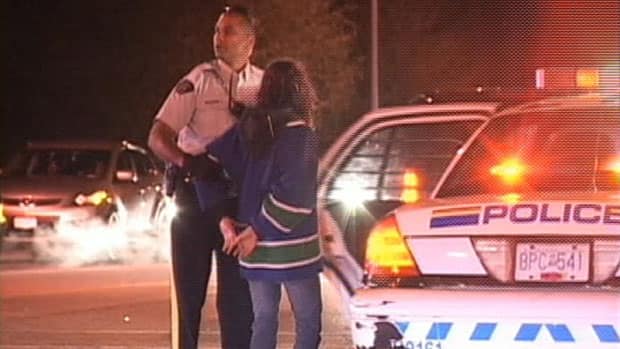 9 years ago
2:00
Police say the suspected drunk driver who killed a Surrey, B.C., woman was at a hockey party before the crash, the CBC's Eric Rankin reports 2:00

The suspected impaired driver involved in a Surrey traffic fatality Tuesday has been fired from her job for driving a company vehicle involved in the accident without authorization.

The driver, who has not been named, was driving a van that allegedly ran a red light and plowed into a car, killing driver Kassandra Kaulius.

Police said the suspect, 34, who was found in woods near the scene, had been at a private party watching a Vancouver Canucks playoff game before the collision.

Kaulius, 22, was a local softball coach, studying to be a teacher and engaged to be married, her father told CBC News.

"She was just so good," said Victor Kaulius. "You couldn't order a better daughter."

Kaulius said it feels like the dark forces in society are winning.

Randy Klann, a spokesman for Precision Restoration, the company that owns the van the suspect was driving, said the tragedy should never have happened.

"That vehicle had no right to be on the road that evening," said Klann. "We have a very strict policy with regards to personal use of company vehicles, as well as consumption of alcohol."

He said people at the company, "are absolutely devastated by everything that has occurred."

Police are recommending a number of impaired driving-related charges against the van driver.

With files from the CBC's Eric Rankin and Mike Clarke