Randy McNolty is haunted by what happened to his dog, Almoe. The Rottweiler-Lab cross died in his arms, as he frantically struggled and failed to release the snare trap that cut into his pet’s neck.

'You better keep your animals safe because I lost a very dear friend.' 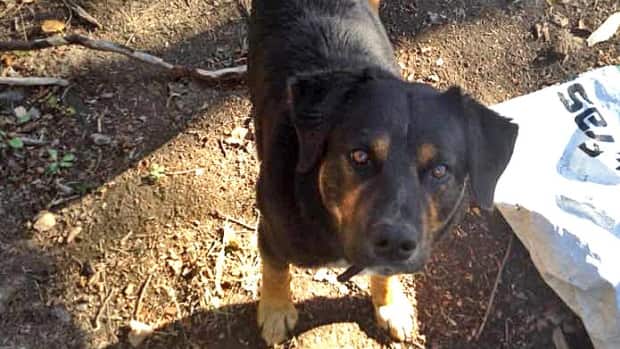 Dog killed in snare: 'I lost a very dear friend.'

WARNING: This story contains a graphic image of a dog killed in a snare trap.

Randy McNolty is haunted by what happened to his dog, Almoe. The Rottweiler-Lab cross died in his arms, as he frantically struggled and failed to release the snare trap that cut into his pet's neck.

Just last year, he says Almoe fought off a bear that attacked McNolty behind his cabin outside 100 Mile House — 300 kilometres northeast of Vancouver.

But while Almoe saved his life, McNolty couldn't save his dog.

On January 17,  McNolty was just one kilometre from his cabin, clearing snow from the public access forestry road leading to his acreage — Almoe running alongside.

McNolty says he had no idea someone had set a snare trap baited with meat, just three metres off the roadway.

"I heard a yelp," he told CBC News. "To my horror, there's my dog — he's tied to a tree with a snare around his neck and blood coming out of his mouth."

As Almoe struggled to break free, the wire trap cinched tight, severing the jugular vein of the 30 kilogram dog. McNolty's voice choked as he recalled how he fought to free Almoe.

"He had blood coming everywhere, and my hand got caught, and it was shooting all over me, and my dog died in my hands."

Just four days later another dog from a nearby home almost met the same fate — just one kilometre away on North Shore Horse Lake Road.

Owner Rob Batch says, if it weren't for a lucky break, his dog Maggie would have died too.

The springer spaniel was also tempted by a baited trap just three metres off the road, while being taken for a walk.

"It's kind of nerve-racking a bit, because a little bit of panic sets in," he said.

A quick-thinking Batch had a friend grab a chainsaw from a nearby snowmobile and head to the tree where the snare was tethered.

"We didn't have the tools to release her from the trap. I had to get a chainsaw to cut the tree, to release the snare. Once we had some slack we could get the snare off her neck then. It was a little upsetting, to say the least," said Batch.

Maggie escaped unharmed, except for a bloodshot eye.

Both snares were legally set on Crown land — but both dog owners say there has to be a change to the regulations to require trappers to post signs.

In B.C., it's an offence to trap within 200 metres of a residence. But licensed trappers can set their lines on Crown land, with no requirement to give the public notice that traps have been set in the area.

There is also no requirement to set traps back from rural roadways, unlike hunting, which cannot be conducted within 15 metres of a travelled route.

McNolty and Batch both emphasize they do not oppose trapping but believe trappers should be required to post signs indicating the presence of traps.

"All we want is to have a sign to let us know, so we can keep our animals safe," said McNulty.

"We have kids playing through all of this area. My grandkids … they could have been caught in these ones. Set that close to the road, it's more of a public hazard."

"We would like to mark every trap, but we simply cannot do that."

He says vandalism and theft are the issue.

"There are people out there who are either opposed to what we're doing or would like to steal our traps".

"The Fur-Bearers," formerly known as the Association for the Protection of Fur Bearing Animals, is totally opposed to trapping — but says at the very least, signs are needed.

"I've been asking the minister (of Forests, Lands and Natural Resources) Steve Thomson, for signage for three years now … and he has refused to even look at that request" says Adrian Nelson, director of communications for The Fur-Bearers.

"It's important that people understand that this is out there, and this is a safety concern for themselves for their pets, their children."

"As a fellow dog-owner, I can readily sympathize with the loss of any pet. I know that trappers work to minimize the capture of domestic animals in their traps," he told CBC News.

3 dogs in one month

The BC Ministry of Environment's Conservation Officer Service receives approximately eight reports a year of pets being caught in traps.

McNolty says he just wants to make sure no one else loses a pet, the way he lost Almoe.

"Any animal, when there's meat in a trap, will go for it. And if a trap is that close to a road, don't you think your dog would go after it?" "

You better keep your animals safe because I lost a very dear friend."

If you have information on this or any other story we should investigate, email us: Investigate@cbc.ca