Disney Cruise Lines is pulling out of Vancouver in 2012 and moving its departures on its Alaska trips to Seattle, CBC News has learned. 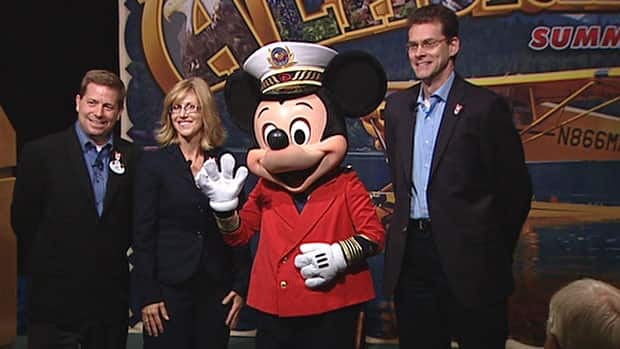 10 years agoVideo
2:40
Vancouver businesses will be hurt in 2012 when Disney Cruise Lines sails past on almost all Alaska trips, the CBC's Kirk Williams reports 2:40

Disney Cruise Lines is pulling out of Vancouver in 2012 and moving its departures on its Alaska trips to Seattle, CBC News has learned.

The news comes just as the cruise line is about to begin its first season operating out of Vancouver in May. In 2011 Disney will bring 90,000 passengers into Vancouver for its 20 trips to Alaska.

The Port of Vancouver estimates each sailing starting from Vancouver generates an estimated $2 million in business for the local tourism industry, meaning the city will lose about $40 million in potential business.

But B.C. won't lose out entirely in the move though. The cruise line will include stops in Victoria on most of its Alaska cruises, and stops in Vancouver on two other sailings in 2012.

Disney is expected to officially announce the move when they release their 2012 schedule on Wednesday .

Disney's decision to sail out of Vancouver to Alaska in 2011 gave the city's ailing cruise ship business a big boost. It came on the heels of some very high profile cruise lines moving their home base from Vancouver to Seattle in 2010, leading to a 30 per cent drop in visitors last year.