The federal Department of Fisheries and Oceans has ordered the owners of two islands in B.C.'s Fraser River to take "corrective measures" after they allegedly destroyed fish habitat in a crucial area for the survival of salmon, steelhead, and endangered white sturgeon.

The federal Department of Fisheries and Oceans has ordered the owners of two islands in B.C.'s Fraser River to take "corrective measures" after they allegedly destroyed fish habitat in a crucial area for the survival of salmon, steelhead, and endangered white sturgeon.

Carey Island and Herrling Island are owned by two B.C. companies that want to develop farmland and grow crops like blueberries on the islands, which are in the middle of the Fraser River between Chilliwack, B.C., and Hope, B.C.

Environmental groups have been railing against the development, saying the companies have already significantly clear cut cottonwood forests that previously covered the islands which they say are crucial to the health of dozens of species of fish that migrate, feed and spawn there. 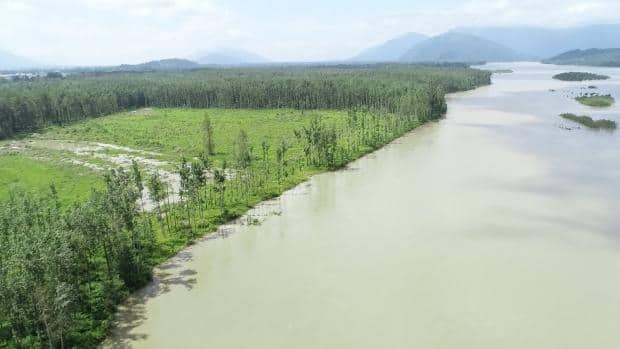 DFO launched an investigation in late November, but because the case is still active officials won't share details of the extent of the damage or what measures they are forcing the islands' owners to take.

"Failure to comply with the corrective measures issued by DFO is a serious matter that may result in further investigation by fishery officers and possible prosecution," Leri Davies, a spokesperson for DFO, said in a statement emailed to CBC News.

"Fisheries and Oceans Canada regards this occurrence as very serious and will take every measure possible to ensure that non-compliance incidents like this are not repeated."

'Heart of the Fraser'

The 80 kilometre stretch of the Fraser River between Mission and Hope, B.C. has become known to conservationists as "the Heart of the Fraser." It's a unique ecosystem that's home to a complex network of gravel bars and a number of large, undiked islands which are naturally flooded with water every spring, becoming a nursery for fish.

"Hundreds of millions of young salmon rear in and around these islands, but in high water the islands actually become habitat themselves," said Mark Angelo, rivers chair of the 100,000 member Outdoor Recreation Council of B.C. He led a CBC News crew on a recent hike through Strawberry Island — another spot in the middle of the Fraser River that's been significantly clear cut over the past two years.

The 67-year-old Angelo, one of B.C's most celebrated conservationists, is a recipient of the Order of B.C. and Order of Canada in recognition of his work on river issues.

As Angelo trudged in rubber boots through a muddy zone of the remaining forest on Strawberry Island, he pointed out its grassy ponds and quiet channels that become a safe refuge for fish during the spring.

Most of the banks of the lower Fraser River have been permanently diked to prevent flooding in the spring, so conservationists say these islands are particularly rare and important habitat for marine life.

Angelo worried clear cuts on the three islands have become so massive they could destabilize the land and cause sloughing into the main river. He warned any more of this kind of development could ruin the Fraser River's immense environmental value.

"When you look at the extent of the damage being done right here… that qualifies this is the most urgent river issue in our country," said Angelo, overlooking the vast part of Strawberry Island that's already been logged.

Bridge proposals to islands under review

The most significant islands in this part of the Fraser River, Herrling and Carey near Chilliwack, B.C., and Strawberry Island, near Mission, B.C., have all been heavily logged and cleared over the past few years.

The islands were at one point tree plantations owned by Kruger Pulp and Paper. They were logged to produce toilet paper and other products and then replanted.

The two farm developers purchased the islands from Kruger, but since they are within B.C.'s Agricultural Land Reserve, special permission wasn't needed to clear cut and convert them to farmland.

But it's another kind of proposal that's again raised the ire of people opposing the development. Two companies, Klaasen Farms Ltd. which owns Herrling Island, and Carey Island Farms Ltd. are each asking for permission to build private bridges across the Fraser so they can grow crops like blueberries and corn on the islands and have year-round permanent access to them.

In an email, the B.C. government told CBC News it's still reviewing the bridge proposals, and it will consider the concerns over potential impacts on marine life.

'Do we want all our food coming from California or China?'

Cornelis Guliker, the director of Carey Island Farms Ltd., defends his small company's move to develop a farm on the 472-hectare island that it owns.

In a note to CBC, Guliker said the land is important for agriculture because it's some of the most fertile in the region, and one of the best climates in Canada to grow a variety of fruits and vegetables.

"There is no more land being made and the good land we have is being taken up by industry," wrote Guliker, who cited the recent construction of a large Molson Coors brewery in Chilliwack as an example.

"Local food is important. Do we want all our food coming from California or China?"

Guliker said there are already hundreds of hectares of unprotected land along the Fraser that flood during the spring freshet and are currently being farmed.

"We can protect fish habitat and farm," he wrote.

The owner of Klaasen Farms did not return calls from CBC.

'There is nothing more sacred to me than this entire river'

People who rely on the river for food and work say the cost of converting these islands into farms is too high.

As fishing guide Dean Werk leads a crew of journalists up a stretch of river he's known for 50 years, he shook his head at what he calls the degradation of habitat on this part of the Fraser.

"I'm astounded that the world is not listening or watching or Canadians are not in outrage in regards to how much destruction we've done in these critical spawning areas," said Werk.

"There is nothing more sacred to me than this entire river and all its habitat." ​

Werk, who's also President of the Fraser Valley Salmon Society, is hopeful the public will get behind the campaign to preserve and restore the "Heart of the Fraser."

The group leading the effort, including Mark Angelo, is planning to meet with provincial and federal ministers in January to express what they call the "urgency" of the issue.

They're also looking into the potential of working with donors to purchase the islands back from the developers, and restore the clearcut areas to their original status.

It's an idea the owner of Carey Island said he is still open to considering.

"If we can find a way to protect this area, that will be one of the great conservation milestones in the history of our country," said Angelo.

"If we fail, that would be like a shot to the heart of this great river."

With files from Greg Rasmussen