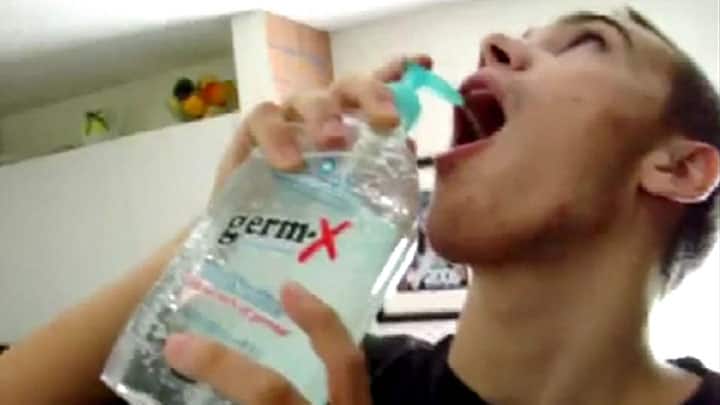 9 years agoVideo
2:19
Officials are trying to stop the theft of hand sanitizers by people who want to drink the alcohol inside, reports the CBC's Kirk Williams 2:19

On the street, foaming hand sanitizer with alcohol content of up to 70 per cent is called a "latte."

Chronic alcoholics realize it’s dangerous, but the price for not ingesting alcohol in some form is seen as a worse alternative,  said Vancouver substance abuse counsellor Billy Smith.

"They go into convulsions, DTs [delirium tremens], you know, hysteria, all kinds of stuff, shock," Smith said. "[They] pretty much reach out for desperation."

Some hospitals are finding that dispensers of hand sanitizer used to help fight the spread of infectious diseases are being taken off walls with crowbars.

Administrators have tried putting the devices in highly visible areas and even inside steel boxes, but they keep getting stolen.

"Any area where we had problems, we did change over and we've had really good results, so we're going to continue to do that," said Vancouver Coastal Health spokeswoman Anna Marie D’Angelo

Some YouTube videos have shown the risky behaviour has spread beyond skid row, with underage youths drinking hand sanitizer deliberately or on a dare, and the consequences can be deadly.

"Even somebody who's used to imbibing on a regular basis can underestimate how much alcohol they are taking," said Dr. Douglas McKnight, a VGH emergency room physician .

"Particularly if they are alone, [they] may end up in a situation where they are unresponsive and die."

McKnight estimates hospitals in the Lower Mainland are seeing about two cases per month of hand-sanitizer alcohol poisoning.