Three-month-old Della Wolf Kangro Wiley Richards is the first baby in B.C. with three parents listed on a birth certificate. With the enactment of B.C.'s new Family Law Act last year, more kids with more than two parents are sure to follow.

B.C.'s new Family Law Act is the first to allow birth certificates with more than 2 parents 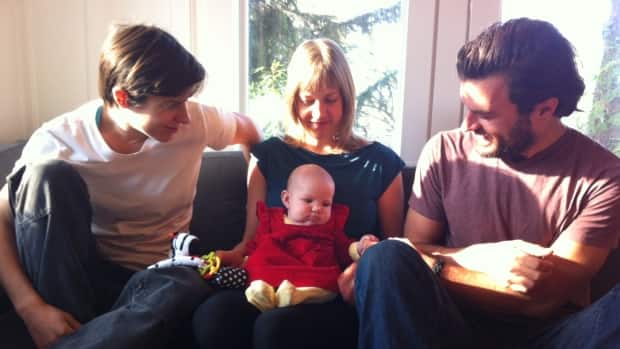 A Vancouver baby has just become the first child in British Columbia with three parents listed on a birth certificate.

Three-month-old Della Wolf Kangro Wiley Richards is the daughter of lesbian parents and their male friend.

"It feels really just natural and easy, like any other family," said biological father Shawn Kangro. "It doesn't feel like anything is strange about it."

Della's family is the first to go through the process, and they finalized the birth certificate registration last week.

B.C., which is celebrating Family Day on Monday, is the first province in Canada with legislation to allow three parents on a birth certificate, although it's been achieved elsewhere through litigation.

Moms wanted a dad, not just a donor

The story starts when Danielle Wiley and her wife, Anna Richards, were faced with a problem many couples encounter: how to get pregnant.

"Both of us, from the beginning, wanted to have a father that would actually be a participant," said Wiley.

"I know a lot of other lesbian couples don't want that. They want an anonymous donor. But both of us liked the idea of somebody who could actually be involved, and who could be a father figure to our children."

Kangro, an old friend of Richards, seemed like the obvious choice.

"When Anna and Danielle approached me, I think instantly I thought I was going to say yes, even though I had to debate a lot of things in my head first," said Kangro.

Before Della was conceived, the three started creating a written contract, outlining how their family would work.

Both of us, from the beginning, wanted to have a father that would actually be a participant,- Danielle Wiley, biological mother to Della

Wiley and Richards would have custody of Della, as well as financial responsibility.

Kangro would be a guardian, with rights to access.

Wiley became pregnant with Della without the help of a clinic, using what she describes as the "homestyle" method.

Though the parenting situation involving Wiley, Richards and Kangro is outlined as one of the accepted arrangements under B.C.'s new Family Law Act, it doesn't mean everything ran smoothly.

"The birth certificate process has been, well, a bit of a process," said Wiley.

In the end, Vital Statistics sent them a new form, with space for up to four parents.

"Up until now, a child could only have two legal parents," said lawyer barbara findlay — who spells her name without capital letters, and helped the three parents navigate the process.

"There is now an upper limit of — we won't know how many parents. There's provision for at least four parents, and possibly more," findlay said.

The new Family Law Act, which came into effect in March 2013, aims to clarify who is a parent and who isn't as more couples turn to assisted reproduction.

There is now an upper limit of — we won't know how many parents.- barbara findlay, Vancouver-based lawyer

The act allow donors to be listed as additional parents, if the parents sign a written agreement before conception.

"The really big shift in the Family Law Act in terms of parents, is how you decide who's a parent," said findlay.

"In the old days, we looked at biology and genetic connections. And that's no longer true. We now look at the intention of the parties who are contributing to the creation of the child, and intend to raise the child. And that's a really, really big shift."

"Of course there's the odd person who worries that we've stepped into something that doesn't have a precedent," said Richards.

"Now that it has come to fruition and people see that we're just this family doing our thing, it's real now, and it becomes much easier to digest for whoever had doubts."