Delay in Vancouver riot charges a contrast to U.K.

Some B.C. residents are expressing frustration about the delay in laying charges in connection to Vancouver's Stanley Cup riot eight weeks ago, while more than 100 people have already been charged following rioting in England this week. 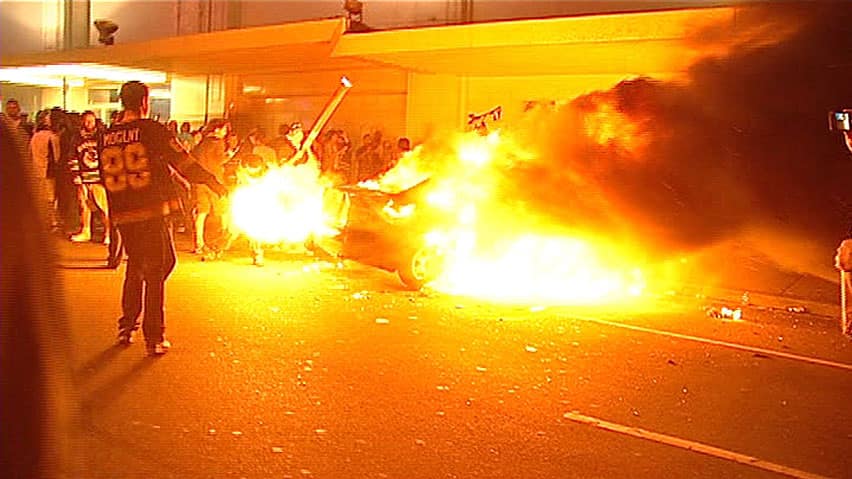 9 years agoVideo
2:23
Some are asking why no charges have yet been laid in the Vancouver riot, while over 100 have been charged in London, the CBC's Kirk Williams reports 2:23

Some B.C. residents are expressing frustration about the delay in laying charges in connection with Vancouver's Stanley Cup riot eight weeks ago, while more than 100 people have already been charged following rioting in England this week.

Out of hundreds of potential cases in Vancouver, eight have been reviewed by the Crown and all of those have been sent back to police for further review.

No charges have been laid, even among the dozens of people who turned themselves in following the June 15 downtown mayhem.

In B.C., police don't lay charges but recommend charges to Crown prosecutors, typically a much slower process than in other Canadian jurisdictions.

"It makes me feel you can just get away with anything here," Vancouverite Allison Chan said Wednesday outside a West Georgia Street building, where riot damage is still evident. "The public needs to know that you can't."

Victoria teacher Tina Ng said she used the broadcast images of the riot to teach her Grade 4 students about the consequences of certain actions, but she told CBC News Wednesday she's not sure she'd do that again.

"If I'm preaching that to my young students and they see adults getting away with it, it's just like my words don't have an effect," Ng said.

Vancouver police are sifting through 1,500 hours of video that has either been submitted to them or posted online. They also are studying an estimated 15,000 photos.

But the volume of material might be part of the problem — it all must be checked to make sure it hasn't been tampered with.

"Part of the reason for the slow police response, I suspect, is they have to comb through all this data to make sure it's in fact valid, it's legitimate [and] people haven't Photoshopped it," said sociology professor Christopher Schneider of the University of British Columbia.

In England, where looters and arsonists have struck in several cities for days, police monitor an estimated 7,000 closed-circuit television cameras in London alone — evidence they can rely on.

"The police have [direct] access to it, so it cannot be manipulated or doctored in any such way," said Schneider. "This is probably some of the reasoning that explains some of the immediate response that we have seen in London."

"We don't want to proceed on a piecemeal basis," said Mackenzie. "We want to be satisfied when we take a matter forward to court [that] we have a picture of an accused's entire activities over the course of the evening."

With files from the CBC's Kirk Williams and Mike Clarke