A Maple Ridge woman was shocked to see a deer with an arrow sticking out of its side in her neighbour's yard this week. The B.C. Conservation Officer Service says this isn't the first time they've heard that someone is targeting deer in residential areas. 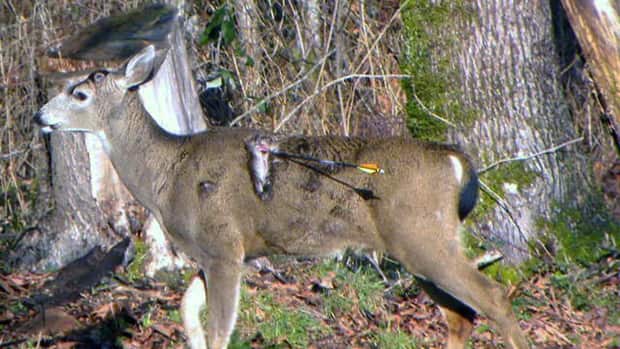 Karen Morris loves to catch glimpses of wildlife from her home near a greenbelt in Maple Ridge, but five days ago she saw and photographed something appalling.

She looked out from her dining room window and spotted a deer, with an arrow sticking out of its side, in her neighbour's yard. She took a photo of the deer from her deck before it walked away.

"We saw it a couple more times coming through, with the arrow," she told CBC News.

A few days later, the deer appeared to be faring worse.

"Our neighbour saw it and said the arrow had either come out or snapped off, but it wasn’t looking too well," she said.

Morris's neighbour told her it was lying down at the edge of his property, and he thought he saw pus coming out of the wound. The deer also appeared to be retching, she was told.

Morris called the B.C. Conservation Officer Service and it sent an officer out to the area, which is near Abernathy Way and 227 Street.

"They came out and looked around, searched for the deer, but couldn’t find it," she said.

Deer targeted with crossbows before

Cody Ambrose, with the B.C. Conservation Officer Service, said this isn't the first time officers have received reports about deer wounded by arrows within city limits.

"We've had what we like to call 'urban poachers' in Maple Ridge, discharging bows in closed areas, in closed seasons, and targeting deer within the Maple Ridge area," he told Stephen Quinn on CBC Radio's On The Coast Wednesday.

Reports of deer struck by arrows came in two months ago and also last year — and these deer were all spotted in residential areas.

Ambrose said it is likely that the weapon used is a crossbow, but officers can't be sure.

They also can't be sure why someone, or some people, are shooting deer illegally in urban and suburban areas. But Ambrose said it's a problem that has plagued Saanich, other parts of B.C., and other provinces in recent years.

"This could be for the thrill of doing it in a residential area. It could be for the meat," he said. "It's not allowed. It's wrong, and it's not tolerated. There's huge financial penalties."

Morris said she hasn't seen the deer she photographed for a few days, and she doesn't know if it is still alive.

She made flyers with the picture saying, "This deer will most likely die a slow and painful death," and put them up around her neighbourhood.

On the flyer, she urged anyone with information to call the provincial hotline for reporting poachers, writing, "We should be horrified by this in our residential area and the harm it causes."

With files from the CBC's Mike Clarke