Fisheries officials investigating the death of a humpback whale discovered inside a fish farm are hoping to figure out whether the farm's net played any role in the mammal's death. 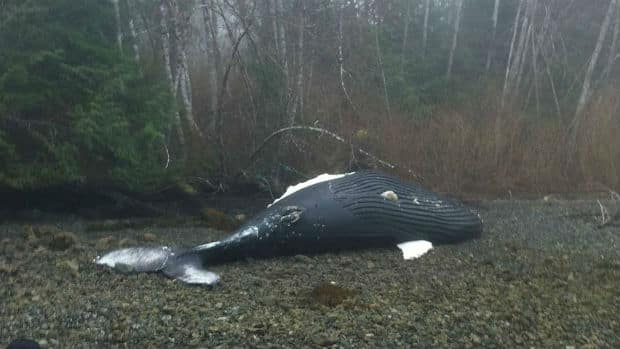 8 years agoVideo
1:56
Fisheries officials are investigating the death of a humpback whale. 1:56

Fisheries officials investigating the death of a humpback whale discovered inside a fish farm are hoping to figure out whether the farm’s net played any role in the mammal’s death.

The animal — bloated from decay with some scrapes on its body — has been extracted from the fish farm nets and taken to a sheltered bay for a necropsy.

"Any speculation now is just that — it’s speculation. We’re investigating the facts. We’ll do an analysis of the blood and tissue samples to determine how the whale actually died. There’s a number of possible scenarios of how this could have happened," Paike said.

Fisheries and Oceans Canada says there was no obvious trauma to the whale's body and describes two possible ways how the mammal might have died.

The whale might have been feeding in the area, before it became tangled in the fish farm nets causing it to drown. Or, as a spokesperson for Mainstream Canada suggested, the whale had been dead for some time and it drifted into the farm site as it decomposed.

Several environmentalists contacted by CBC News were reluctant to comment until it's clear what caused the whale's death, but they are watching the story with interest.

"It’s generating interest because it is unique," Paike said.

"When you end up with a threatened species that is dead in and around an aquaculture site, it is something that bears investigation, and that’s exactly what’s happening. We’re trying not to jump to any conclusions. We’re trying to take a look at the facts as they evolve."