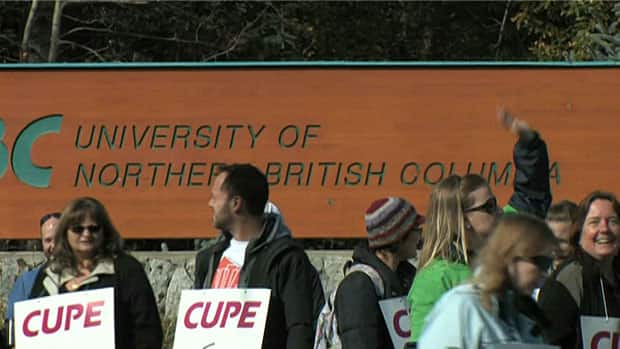 8 years ago
2:09
Graduation ceremonies were picketed as lines went up at six universities across B.C. 2:09

Colleen Garbe, the president of CUPE Local 116 at UBC, says provincial cuts to post secondary education have affected the universities' ability to bargain.

"What's been happening is we've been met with huge frustration because our employees at the universities can't sit down and negotiate a fair and respectful agreement with the various universities. The province is tying their hands."

Garbe says CUPE workers are looking for job security, inflation protection, and a wage increase, and says the job action will escalate until an agreement is reached.

The job action comes as two other major B.C. unions vote on new contracts negotiated with the province.

B.C.'s 32,000 nurses are voting on a new contract offering a three per cent wage hike and slightly longer hours, which will allow the hiring of more staff.

Last month the province and the B.C. Government and Service Employees Union announced a separate tentative agreement covering some 26,000 workers.