The RCMP 'drove him to suicide,' says grieving girlfriend of Cpl. Neil Ogurian, who killed himself one year ago, on May 4, 2014, after a prolonged dispute over his harassment grievance against a manager. 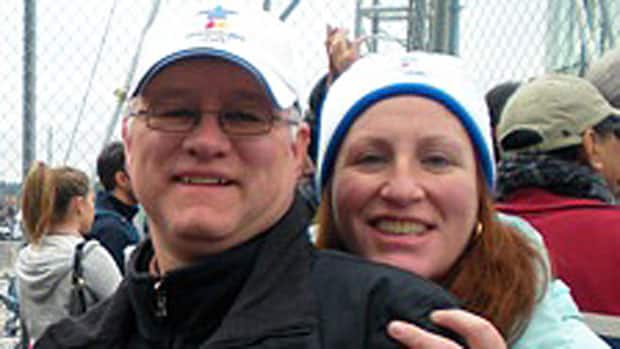 ​On the first anniversary of Cpl. Neil Ogurian's death, his girlfriend is still struggling with what led the B.C. Mountie to take his own life on May 4, 2014, after a prolonged dispute with RCMP managers.

"The RCMP strung him along with false promises and eventually drove him to suicide," said Julia Chapacharis, who had been in a long-term relationship with Ogurian.​

She says mean-spirited managers refused to comply with a signed agreement after Ogurian won a harassment grievance.

"They took away the man I love, my partner.… and destroyed Neil's life."

​The 56-year-old was promoted and transferred to Langley, B.C., in 2007, and that's when the bullying started, says Chapacharis.

"He was harassed by an inspector and that led him to file a grievance," she says, explaining the new boss didn't like Ogurian, who was the only qualified applicant.

He was then transferred back to his previous job and relegated to a lower-ranked constable position, which was humiliating, she says.

In 2012, a superintendent signed an "early resolution outcome document," agreeing to apologize to Ogurian, pay his legal bills and, most importantly, remove a negative assessment from his file so he could be promoted.

Before any of that happened, the superintendent retired and his replacement refused to honour the agreement, according to emails obtained by CBC News.

'Why am I still waiting?'

"This has [affected] my ability to continue with my career in the force" wrote Ogurian, accusing the RCMP of breaking its own rules.

"What is the moral, legal and ethical reason why I am still waiting?" he asked, 11 months before his death.

It took the RCMP three months to answer, ordering him to meet with the new boss to discuss his grievance.

Even though a grievance case manager had confirmed Ogurian's "full agreement means the matter has been resolved," the superintendent wanted him to sign a new grievance settlement agreement.

CBC News has obtained the RCMP grievance policy in effect at the time, and there is no reference to any need for a second agreement, but it does say once an early resolution is filed the grievance is resolved and the force must administer the agreed upon redress.

'Managers were abusing their authority'

"Neil was frustrated and thought managers were abusing their authority," says an officer who spoke to him the day before his death, but requested his name be withheld to avoid discipline for doing an unauthorized interview.

​"That just added to the mental stress, because he had no faith they were ever going to honour the agreement that would have vindicated him," says the officer who had been helping Ogurian.

​Chapacharis says that by the spring of 2014 the stress was unbearable.

​They were were "playing games with Neil, mentally abusing him," says friend and former supervisor, Cpl. Rolly Beaulieu.

"Oggie was a great guy," who felt punished for complaining, says Beaulieu.

Three days before his death, the RCMP emailed another meeting request to discuss the grievance he had filed seven years earlier.

The email included a proposed apology that acknowledged "the RCMP did not thoroughly review your harassment complaint and did not follow RCMP policy and procedure … in a timely fashion" and that delay caused "stress and dissatisfaction for you."​

"You have performed well … and are continuing to develop as a supervisor and leader in the RCMP," said the May 1 draft.

"Once you complain, you're targeted," says Chapacharis.

"The RCMP is a toxic workplace" she says, believing Ogurian felt he could not endure another two years on the force before his planned retirement.

"We planned to retire and grow old together. My days are filled with mourning, grief and tears."

The RCMP says that review and Ogurian's grievance are confidential.

Vermulen also insists managers followed procedure because "a grievance settlement agreement is the next step in the process, after early resolution."

But that differs from the written policy obtained by CBC.

​RCMP's grievance procedure was revised in November and harassment complaints were separated from the process to align with Treasury Board rules.

Chapacharis has been interviewed by the B.C. coroner, who is due to release a report on Ogurian's death and that of Sgt. Pierre Lemaitre, who committed suicide in July 2013.

Lemaitre, a high-profile RCMP spokesman, bore the brunt of criticism that the RCMP misled the public over the Tasering death of Robert Dziekanski.

Friends say Lemaitre was tortured over the fact he was never allowed to clear his name.

Thirty-two Mounties have taken their own lives in the last nine years, including 15 retirees.

The Mounted Police Association called for more support for officers with post-traumatic stress after a New Brunswick corporal took his life in October.

Last year, the RCMP launched a plan to encourage members with depression to seek help.

If you have information on this or any other story tip, email Investigate@cbc.ca