More COVID-19 vaccines are on the way to B.C., Provincial Health Officer Dr. Bonnie Henry announced Monday, as she reported that health officials have confirmed another 1,236 cases of COVID-19 over the last three days and 13 more deaths.

People over 80 to be first in line

More COVID-19 vaccines are on the way to B.C., Provincial Health Officer Dr. Bonnie Henry announced Monday, as she reported that health officials have confirmed another 1,236 cases of COVID-19 over the last three days and 13 more deaths.

There are now 234 people in hospital with the disease, including 69 in intensive care, out of 3,976 active cases across the province.

Henry provided an update on B.C.'s vaccination program, which has been delayed by a lack of supply from Pfizer-BioNTech and Moderna. She said fresh doses are now on their way again, and the province is on track to begin mass immunization clinics in March.

The first in line for the shot will be people over the age of 80, who will be receiving information in the weeks ahead on when and how to get their vaccinations.

Henry said delays in production from the manufacturers have been "growing pains that we would expect" for vaccines that were developed and approved very quickly, and she hopes things will be running more smoothly by April.

A total of 154,496 doses of COVID-19 vaccines have been administered, including 12,111 second doses. Most people have received their second dose within B.C.'s target timeframe of 42 days, Henry said, and she argued that data from other parts of the world suggest that waiting six weeks or even longer is not a danger.

There have been 217 reports of adverse events following vaccination, including 18 severe allergic reactions, she said.

Henry said she is watching closely to see if and when it will be safe to lift the current restrictions on daily life. She said she wants to be confident that opening up social connections won't mean an immediate surge in new cases.

In the meantime, she said everyone should be sticking close to home this upcoming Family Day weekend.

"We all need to stay local and not travel unless it is required for work or medical reasons," she said. "By avoiding travel now, we'll have much more to enjoy later."

Monday's update was the first since Friday, and it included two new outbreaks in the health-care system at Abbotsford Regional Hospital and Dawson Creek Hospital.

In transition from 'one pandemic to another'

Watch | Dr. Bonnie Henry lays out what she knows about the COVID variants of concern in B.C.: 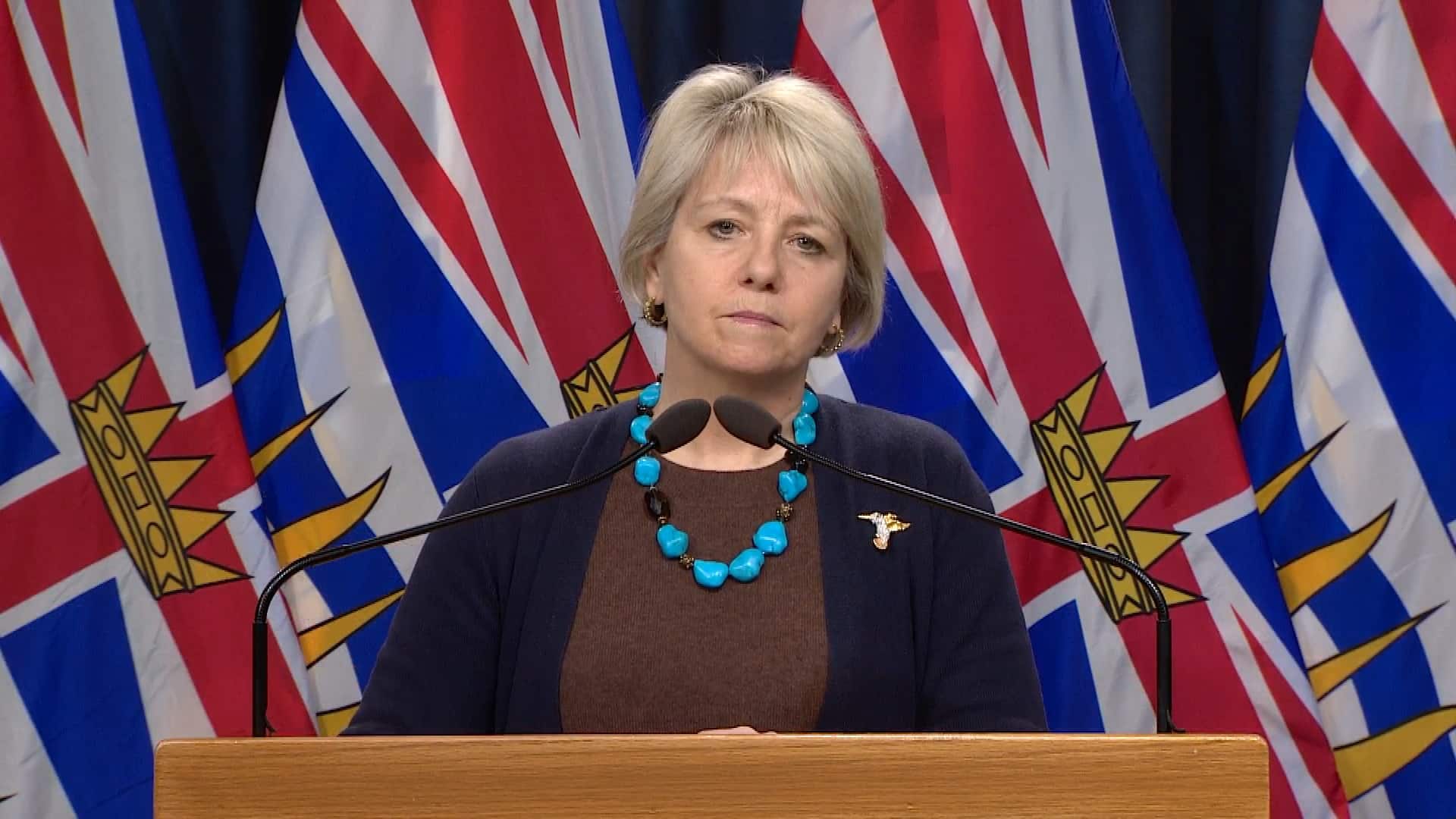 16 days agoVideo
1:14
B.C.'s provincial health officer says the province is aiming to control the spread of more infectious coronavirus variants over the next few weeks as it ramps up vaccinations. 1:14

She said she is in agreement with Toronto's Chief Medical Health Officer Dr. Eileen de Villa, who said Monday that "we are in the transition of one pandemic to another" because of the appearance of new, more infectious variants of the coronavirus.

"It does change the game in some ways if it starts to take off and become dominant," Henry said.

All but one of B.C.'s variant cases are either directly related to travel or contact with someone who has travelled. No cases of the variant first identified in Brazil have been found in B.C. to date.

"We are all tired of this, but it can lead us into a brand new charge for increased numbers of cases if we don't keep doing what we're doing," she said.

To date, B.C. has reported 70,952 confirmed infections with the novel coronavirus, of which 1,259 people have died. About 6,900 people are currently in isolation and being monitoring by public health workers because of close contact with known cases.

Meanwhile, B.C. will begin a clinical trial on a COVID-19 drug therapy approved by Health Canada on an emergency basis for patients who are at risk of being hospitalized with severe illness.

Henry said the trial on the drug bamlanivimab, which has been studied elsewhere, is expected to get underway by the beginning of March.

The drug would be given to patients within a certain time period after diagnosis, involving a one-hour infusion and two hours of observation.

Health Minister Adrian Dix said the trial will be done at Surrey Memorial Hospital with the help of a $1-million donation from a biotech company in B.C.

Bamlanivimab is designed to block the COVID -19 virus from attaching to and entering human cells. Health Canada authorized its use in November.

Speaking on CBC's The Early Edition earlier on Monday, Dix said there are still between 400 to 500 new cases of COVID-19 being detected daily, while the new coronavirus variants being reported across the world, some of which have also arrived in B.C, are alarming.

While Dix says B.C.'s vaccine program has gone "well" so far, there will not be enough vaccine arriving in the coming month to create "any kind of community immunity."

"So all of those are a reason to extend our controls on gatherings over the next number of weeks," he said.

Data released Friday from the latest round of modelling shows the COVID-19 reproductive number hovering around one in every health authority, which means that each case is still leading on average to one other case.

All events remain banned, including in-person religious services, and masks must be worn in indoor public spaces.

Last week, Henry said there's a chance restrictions might change by March, but there is no official expiry date on the extended orders.

With files from Andrea Ross and The Canadian Press