How a small-town B.C. council meeting became a source of COVID-19 disinformation worldwide

The city of Dawson Creek, B.C., has removed a previously published portion of a recent city council meeting video after it began circulating in COVID-19 disinformation groups worldwide.

The city of Dawson Creek, B.C., home to about 12,000 people near the B.C.-Alberta border, has removed a previously published portion of a recent city council meeting video after it began circulating in COVID-19 disinformation groups worldwide.

The incident illustrates why everyone — including small communities — needs to think more deeply about who they give a platform to, says Ahmed Al-Rawi, an assistant professor at Simon Fraser University who specializes in disinformation.

The portion of the video that was removed featured several speakers at a Sept. 2 council meeting making false or misleading statements about COVID-19 vaccines and their effectiveness.

The speakers arrived at city hall ahead of the meeting to protest the B.C. government's recent announcement of a vaccine card program, which limits access to non-essential recreational and social activities to people who can provide proof of vaccination.

The meeting was called to clarify how the program would impact city facilities such as the pool and curling rink, said Mayor Dale Bumstead — not to debate the merits of the vaccine card or vaccination itself.

But outside city hall, about 100 people angry about the vaccine card held placards and demanded a chance to speak.

Council decided to let some of them make short presentations ahead of the regular meeting. Bumstead said it was not an effort to endorse their ideas, but to allow them to be heard as members of the community he was elected to represent.

"We had no way to verify or even identify some of the information and people speaking, because it was spur-of-the-moment," he said in an interview with CBC.

False comparisons to the Holocaust

Things didn't get off to a smooth start. Before the meeting, police were called to respond to several protesters who refused to wear a mask inside council chambers, a requirement under public health guidelines.

In a video live-streamed to Facebook by one of the protesters, police can be seen escorting one man away as another begins yelling, "Brownshirts!" Later, members of the crowd joined in, calling RCMP "Nazis" and "Gestapo."

The video has prompted condemnation from both B.C. Premier John Horgan and the Centre for Israel and Jewish Affairs, headquartered in Toronto, which said the comparison of B.C.'s public health policy to "the systematic identification, humiliation, persecution and murder of Jews and millions of others is absurd, dangerous and disrespectful."

"You putting on a mask to cover your unbrushed teeth is not the same as what happened to Jews" — Dawson Creek RCMP officer is done with the Holocaust comparisons<a href="https://t.co/e72RJeEnMH">pic.twitter.com/e72RJeEnMH</a>

Thank you Premier <a href="https://twitter.com/jjhorgan?ref_src=twsrc%5Etfw">@jjhorgan</a> for denouncing these despicable comparisons. Comparing pandemic healty policy in BC meant to protect people, to the systematic identification, humiliation, persecution &amp; murder of Jews, and millions of others is absurd, dangerous, &amp; disrespectful <a href="https://t.co/kY7QrIBAwK">https://t.co/kY7QrIBAwK</a>

Since then, one of those presentations has been circulated on multiple social media platforms by anti-vaccination groups, racking up tens of thousands of views.

The presentation in question was made by a woman who, in local small business listings, identifies herself as the owner of an "alternative clinic" that uses "energy healing" and "psychic readings," along with herbal teas and essential oils, to help clients.

While presenting to council, she said she was a "molecular biologist," without specifying her credentials. She falsely called the vaccines a "genetic experiment" with a high fatality rate, when the reality is they are the result of years of research and have been safely distributed to millions of people worldwide after passing multiple clinical trials.

At the end of the presentation, the mayor thanked the woman for her time, and she thanked him for hearing her out.

And that, thought Bumstead, was the end of it. Council later voted to follow public health guidelines and adjourned.

Afterwards, city staff did what they do with every meeting: they uploaded it to the city's YouTube page, where the woman's presentation took on a life of its own.

At first, people just shared a direct link to the entire council meeting. But before long, some users started extracting the woman's presentation and sharing it on its own. One YouTube user with more than 21,000 subscribers clipped her speech and uploaded it to their channel, where it has racked up more than 200,000 views.

The video has also been posted to Twitter, TikTok and Facebook, as well as to alternative sites popular among anti-vaccine users. In most posts, the woman is referred to as a molecular biologist, while in some she is wrongly identified as a doctor. Few mention her true profession as a natural healer and psychic.

Disinformation expert Ahmed Al-Rawi said this is a common technique among anti-vaccine groups — inflating or inventing the credentials of people speaking out against public health measures in an effort to give their viewpoints a false sense of credibility.

"They bring in a fake expert who will provide contrary evidence to what the scientific consensus is to cast doubt on the validity of public health policies," he said.

Al-Rawi compared the technique to past efforts to undermine consensus science surrounding climate change or the dangers of smoking. People can search the internet for videos like the Dawson Creek council meeting that can be re-purposed to serve their needs.

"They cherry-pick information … in order to convince others that they are right."

Al-Rawi said the presence of the video on the city's official website lent it additional credibility, as did the appearance of Dawson Creek's logo and the fact that the presenter was speaking inside council chambers. Without context around why she was being allowed to speak, he said, the setting added a sense of legitimacy to what she was saying, no matter how incorrect the content.

As the number of views of the video increased, so did scrutiny of Dawson Creek's council for giving anti-vaccine protesters a platform to speak in the first place.

Bumstead said staff at city hall were inundated with calls from people across North America about the video, some pleased with what they had seen, others upset the city had allowed false assertions to be broadcast unchecked.

After several weeks, Coun. Shaely Wilbur issued a public apology on her Facebook page. "I am from the core of my being disturbed that if in any way I have allowed misinformation to be taken as fact and distributed through social media via a delegation to council," she wrote, and encouraged residents to get vaccinated.

Likewise, Bumstead said he was upset by the "turmoil" the video had caused, and last week the decision was made to remove all the impromptu speakers' videos from the city's YouTube page.

The official reason, Bumstead said, was that none of the speakers had properly applied to give their presentations to council, nor had they been properly vetted or identified in advance, so ultimately they are not considered part of the official meeting. 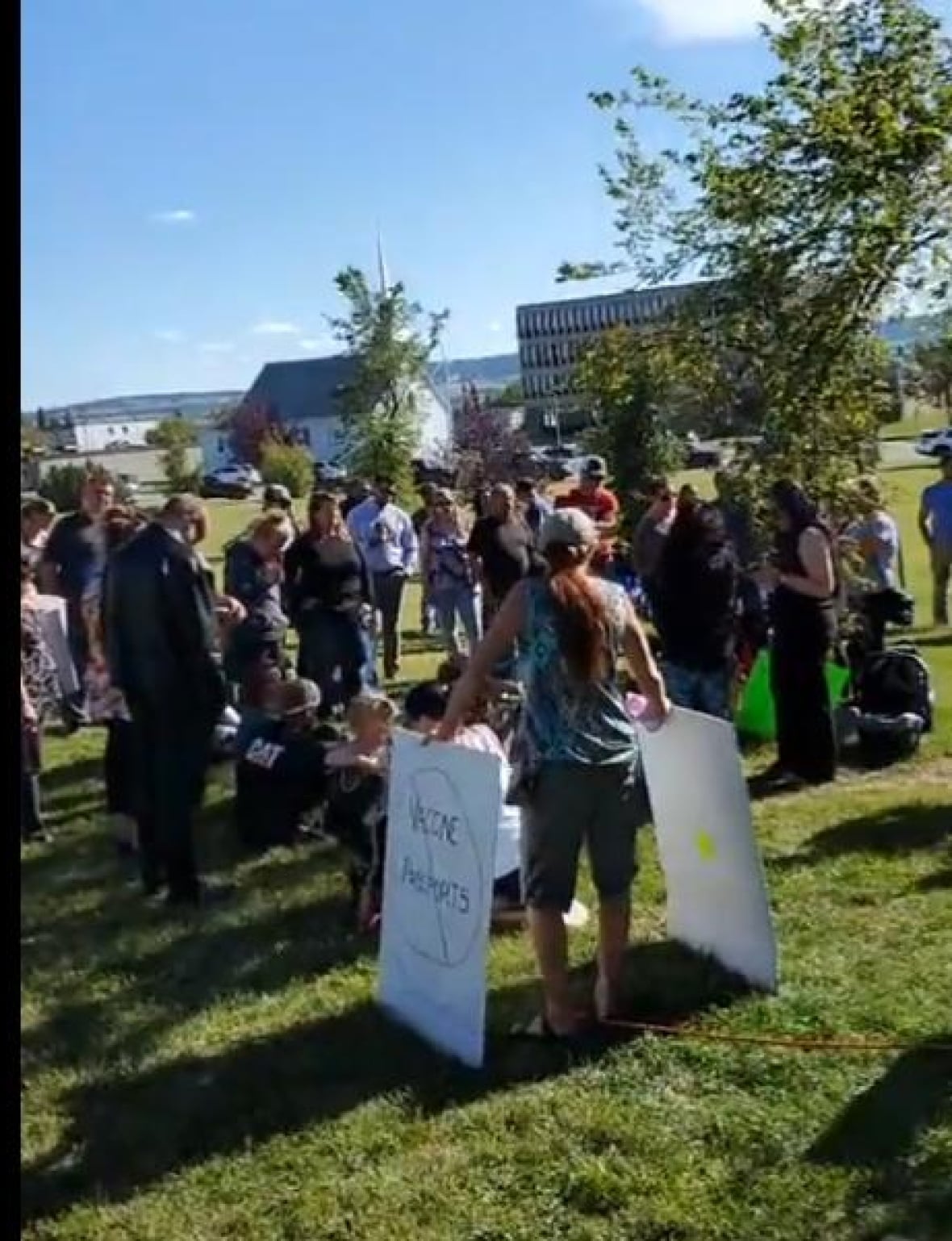 Daybreak North9:37How a small-town B.C. council meeting got sucked into the global COVID-19 disinformation chain
The city of Dawson Creek, B.C., has removed part of a recording of a recently published council meeting after it was used by anti-vaccination groups to spread incorrect information about COVID-19. 9:37

But other videos out of the city's control are still circulating, which illustrates why officials need to think more deeply about who they give a platform to, said Al-Rawi.

In years past, he said, council meetings were seen only by those able to attend in person. Now they can be recorded, edited and redistributed for millions worldwide.

"[Local governments] have to be more literate about how to deal with these issues."

For his part, Bumstead said he still believes in listening to people with differing opinions, but the whole episode has left him "disappointed and hurt." Moving forward, he said he will not consider allowing impromptu presentations from members of the public, no matter the topic.

"We were trying to be lenient," he said. "But it just created a huge amount of extra work."