The current orders restricting daily life and socialization in B.C. are going to stay in place indefinitely, the province announced Friday. The orders had been set to expire at midnight.

'We need to protect the progress we have made,' Provincial Health Officer Dr. Bonnie Henry says

The current orders restricting daily life and socialization in B.C. are going to stay in place indefinitely, the province announced Friday.

The orders had been set to expire at midnight. In announcing the extension, officials said B.C has made "encouraging" progress in reducing the spread of COVID-19, but the situation isn't stable enough to allow people to start getting together again.

"Right now, we need to stay the path," said Provincial Health Officer Dr. Bonnie Henry. "We need to protect the progress we have made and not squander our progress."

The orders state that, with a few small exceptions, social gatherings must be restricted to the members of your immediate household. All events are banned, along with in-person religious services, and masks must be worn in indoor public spaces.

Henry said there's a chance things might change by March, but there is no official expiry date on the extended orders.

"By the end of the month, once again, we can look to having our 'safe six' — our bubble — again," she said.

"I will be continuously reviewing the data that we have to see if we can do it earlier," she continued. "But I want people to start thinking: It's not going to be, 'Yay, we're out of this, we're back to normal.' It's going to be, 'Can we slowly and thoughtfully find an increase in those social connections that we all really want?' "

B.C. has been living under the restrictions for nearly three months, going through the dark winter with a ban on social gathering with people who don't live in the same household. 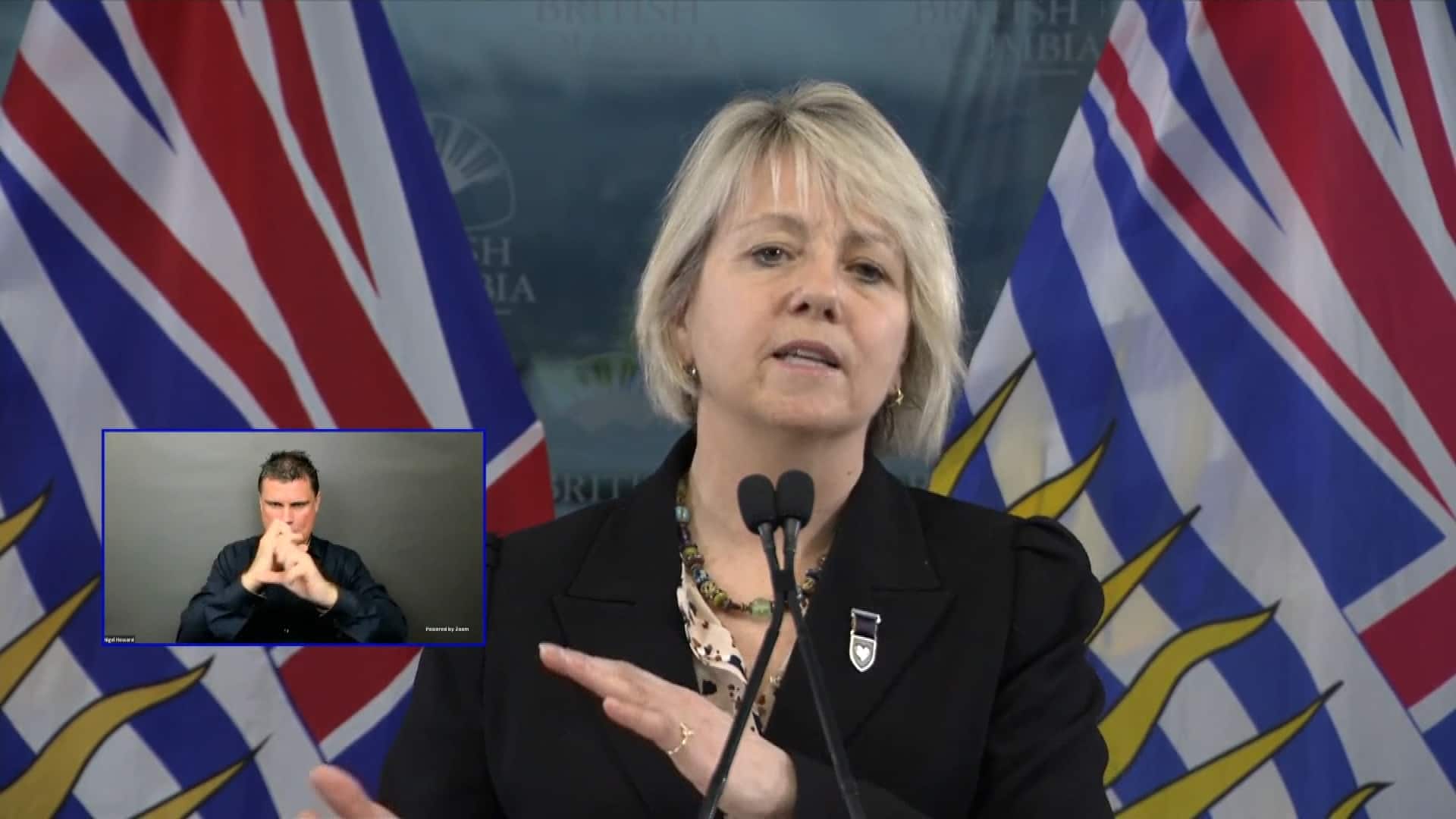 'All bets are off' if B.C. sees new COVID-19 variants spread in coming weeks

22 days ago
1:51
Dr. Bonnie Henry says B.C.'s current restrictions on gatherings, which have been extended indefinitely, could begin to tighten even more if the number of new coronavirus variants starts to spread. 1:51

The latest round of modelling was also released Friday morning. It shows the rate of infection in B.C. has been moving slightly downward in recent weeks, with roughly 400 to 500 new cases every day, but the rate isn't declining as quickly as officials would like.

Data released Friday shows the COVID-19 reproductive number is stubbornly hovering around one in every health authority — meaning each case is still leading to at least one new case.

Henry said the situation in B.C. could take a serious turn for the worse if social interactions increase too quickly, or if new and more-transmissible variants begin spreading.

"We are on a good trajectory, but it could change very quickly," said Henry.

"If we start to see one of these variants take off, then all bets are off and we may actually increase some of the restrictions we have in place. I don't want to go there."

She said continuing with current restrictions will buy time to flatten the curve, continue vaccinating the public and learn more about variants of concern. She said keeping case counts low will also ensure the health-care system has room to respond if variants take off.

B.C. has sequenced 4,500 positive cases since Dec. 1 to check for variants of the coronavirus first detected internationally. Variants first detected in South Africa and the U.K. were found in 28 of those samples.

Fourteen cases of the variant first found in the U.K. were identified in people who'd travelled internationally and their close contacts. In five cases of the South African variant, officials don't know where the person caught the virus.

Based on those results, the province said variants are considered contained in B.C.

But data on the variant found in the U.K., for example, suggests it is 50 per cent more transmissible from person to person than the common strain of the coronavirus. If it spreads, it could dramatically increase the growth rate of the pandemic curve in B.C.

Friday's modelling showed Fraser Health and Interior Health regions had the lowest reproduction rate as of Tuesday, but only by a fraction. The Island Health region was the highest, sitting at just above one.

The data said children have had a low infection rate since returning to school on Sept. 7. Children under the age of 18 accounted for 12.5 per cent of all cases in the province.

There was a slight uptick in community transmission after the winter holidays, Henry said, due to gatherings that happened over the break. Data showed transmission actually dropped after students returned to school in January.

Both Henry and B.C. Health Minister Adrian Dix urged residents during their last news conference not to make any plans outside their household for Super Bowl Sunday.

The province reported 465 new cases on Thursday, bringing the total number of active cases to 4,447. The number of patients in hospital with COVID-19 — 257 — was at its lowest level since Nov. 21.