B.C. officials announced how the province will resume elective surgeries postponed by the COVID-19 crisis. It's a plan that could take two years and $250 million to carry out.

B.C. is forging ahead with plans to gradually reopen B.C., laying out how it intends to resume elective surgeries and continuing to relay guidelines for people going about their daily lives in coming weeks.

The province on Wednesday announced small gatherings with up to six people will be OK by next weekend.

"This is not a return to normal," said Horgan, joined by B.C.'s top doctor Bonnie Henry and Health Minister Adrian Dix at a Wednesday news conference. "This is a new normal."

The premier said the provincial restart will happen in phases, spaced out by two- to four-week time periods. It will begin with allowing small gatherings, like backyard barbecues, as long as those participating aren't sick or showing any symptoms of COVID-19.

Absent from the announcement was an official reopen date and an exhaustive list of hard-and-fast rules for what British Columbians can and cannot do under the new guidelines. The onus has been left on the public to collectively make choices that will limit regular interactions to below 60 per cent of normal and prevent a resurgence of the virus.

Minister Dix said British Columbians have proven they are capable of making the right decisions over the past two months.

"British Columbia has imposed fewer rules than other jurisdictions and British Columbians responded, I think, by following those rules to a great degree. The flattening of the curve we've seen so far is the success of everybody," he said Thursday.

Dix warned everyone must still maintain physical distancing, wash their hands regularly and avoid touching their face even as they widen their circle of contacts. Anyone who feels the slightest bit unwell must not leave home.

The federal government announced on Thursday a $4-billion program to top up the wages of essential workers. Provincial governments will contribute $1 billion of the funds and will be in charge of determining which workers receive the help.

WATCH: In time for the long weekend, B.C. will allow gatherings of up to six people 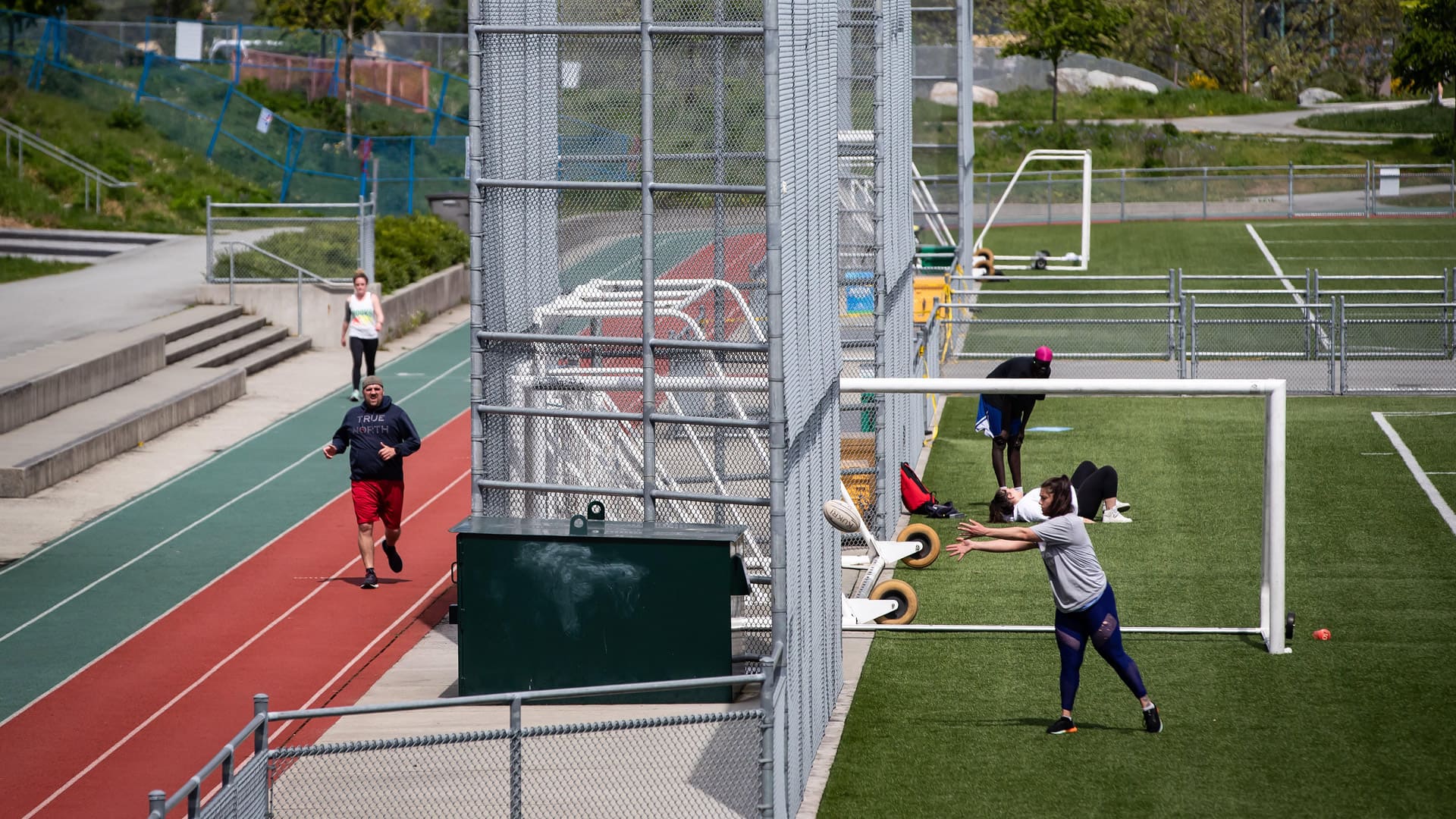 In time for long weekend, B.C. allows gatherings of up to six people

9 months agoVideo
2:17
B.C. is easing its COVID-19 restrictions just in time for the long weekend. The province is allowing groups of up to six people to gather. 2:17

Dr. Bonnie Henry, during a Thursday afternoon briefing, said 33 new COVID-19 cases had been detected in the last 24 hours. That means in all, 2,288 people in B.C. have tested positive.

There are 76 patients in hospital with COVID-19, including 20 in intensive care.

By Thursday, 1,512 people had recovered.

The province estimates 30,000 non-urgent scheduled surgeries were either postponed or not scheduled in B.C. due to the COVID-19 crisis. Another 24,000 people could be without a referral to get on a wait list.

"But because of those sacrifices, we can move forward," Horgan said Thursday. "[Those patients] have been living in pain. Today we will start the process of relieving that pain."

Postponed elective surgery patients will be contacted in coming days. Surgeries are set to resume by May 18.

Getting surgeries back on track will require new operating rooms and new staff, including surgeons, nurses and anesthesiologists.

Catching up with all those procedures could take two years and cost at least $250 million in extra funding, the province said Thursday.

Some aspects of life with COVID-19 will not be changing soon, Horgan added. Large gatherings likely won't be possible until a vaccine is developed, which health officials have said could take up to 18 months.

Non-essential travel plans, including travel within B.C., should be shelved for now as well, the premier said. 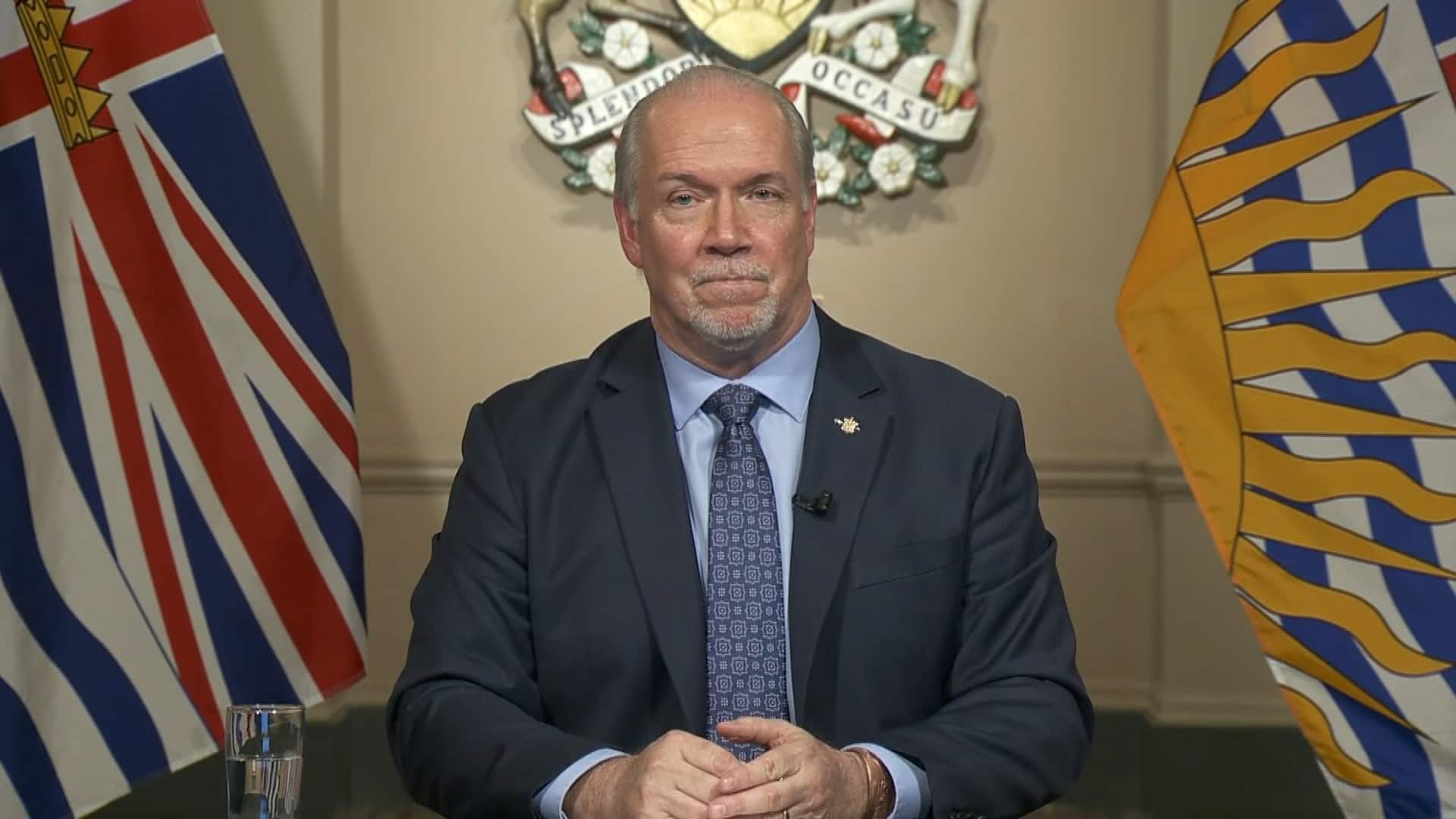 9 months agoVideo
1:25
Even though COVID-19 restrictions will ease, Premier John Horgan says British Columbians should stay local and enjoy their corner of the province this long weekend. 1:25

Oppenheimer Park on the move

At Vancouver's Oppenheimer Park, over 175 tent city residents have been moved into shelter spaces secured in hotels and community centres.

There are still people who need to be moved, however, after the province established a May 9 deadline to empty the park of campers over concerns of COVID-19 transmission.

Tanya Fader with the Portland Hotel Society said most people are willing to leave.

The province has said if residents of Oppenheimer Park and Victoria's Topaz Park and Pandora corridor have not left by May 9, enforcement could follow.

Vancouver mayor to meet with industries

At a briefing Thursday afternoon, Vancouver Mayor Kennedy Stewart said he was planning to poll residents and meet with leaders of various industries in the city to determine the city's next steps.

Many of the city's workplaces are provincially regulated, like bars, nightclubs and restaurants, but he said he wanted to have input from owners of those businesses to take forward to the province.

"We are in a new normal and we need to think differently if we are to succeed," Stewart said.

Stewart says the city will embark on a new round of public opinion polling to help guide decisions, including around when and how the city reopens its community facilities.

Libraries, non-essential community centres, playgrounds and outdoor recreation facilities like tennis courts have been shut down for more than six weeks in Vancouver and similar closures have taken place across B.C. communities.

If no one is ready to visit those facilities, Stewart said, it doesn't make sense to open them. He said outdoor facilities will likely be the first to reopen.

Stewart said he is meeting with representatives from the film and TV production industry Thursday afternoon.

He added he plans to bring forward a council motion Tuesday to help speed up development applications.

Stewart suggested his proposal could cut several months from the building application process for experienced developers.

Health officials widely agree the most important thing you can do to prevent coronavirus and other illnesses is to wash your hands regularly and avoid touching your face.

The World Health Organization said more than 80 per cent of COVID-19 infections are estimated to be mild.

As of 4:30 a.m. PT on Thursday, Canada had 63,496 confirmed and presumptive cases of COVID-19, with provinces and territories listing 28,184 of those cases as resolved or recovered. A CBC News tally of COVID-19-related deaths based on provincial figures, regional health data and CBC's reporting listed 4,348 deaths in Canada, with another two abroad.

The numbers are not a complete picture, as they don't account for people who haven't been tested, those being investigated as a potential case and people still waiting for test results.

For a look at what's happening across the country and the world, check the CBC interactive case tracker.

Stay home. Isolate yourself and call your local public health authority or 811. Do not visit an emergency room or urgent care centre to get tested.

Find information about COVID-19 from the B.C. Centre for Disease Control.

With files from Jesse Johnston, Justin McElroy and The Canadian Press