A full-grown cougar was spotted by staff Thursday at Goldstream Park near Victoria Thursday, just one hour before a kindergarten class was scheduled to visit. 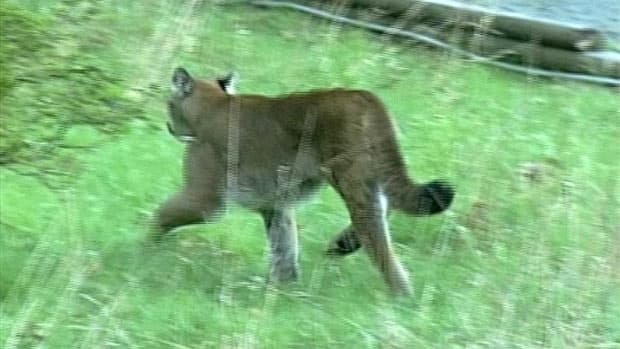 10 years ago
1:31
Staff at a Victoria-area park had a close encounter with a cougar an hour before a kindergarten class arrived, the CBC's Alan Waterman reports 1:31

A full-grown cougar was spotted by staff Thursday at Goldstream Park near Victoria Thursday, just one hour before a kindergarten class was scheduled to visit.

The animal was caught on a video camera as it sauntered a few metres away from one of the main buildings in the park.

The sighting is not likely to be repeated and the animal likely will not be a threat, according to park operator Rick Carswell.

"It's when they're hurt or startled that maybe they would come back at you," said Carswell. "But usually they would just run away... We think this one just ran right through not knowing that we were around."

The kindergarten class was allowed to complete its visit and view some salmon fry as planned in the park, about 17 kilometres from downtown Victoria.

But the visit had an added brief lecture from park staff — on cougar safety.

Cougar sightings are common, especially on Vancouver Island, but attacks, while often dramatic, are rare.

Five people have been killed by cougar attacks in the past 100 years in B.C., according to the provincial environment ministry website. Four of those deaths occurred on Vancouver Island.

During the same period, there were 29 non-fatal attacks in British Columbia, 20 of which occurred on Vancouver Island, the website said.

The majority of the attacks were on children under the age of 16.