A couple living on the Sunshine Coast of B.C. caught a rare glimpse of three fully-grown cougars strolling together on a beach one morning last week. 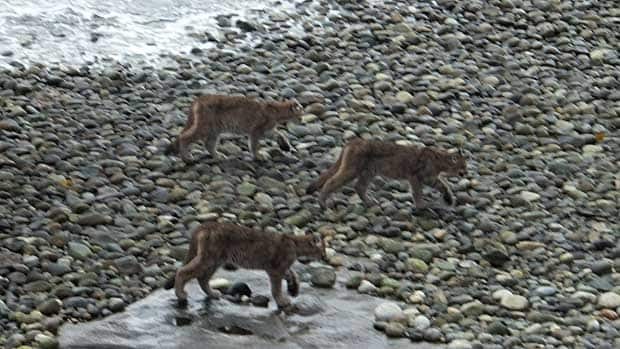 A couple living on the Sunshine Coast of B.C. caught a rare glimpse of three fully-grown cougars strolling together on a beach one morning last week.

Greg and Mary Carter glanced out the window of their waterfront property in Roberts Creek and spotted the cats travelling west along Flume Beach — about 45 metres from their house.

"We saw them for probably ... a few minutes. They were just ambling along. They looked at us and didn't run or anything. They just kept on going like they were looking for something — just out for a walk," said Greg.

Greg said they are used to seeing lots of animal activity on the rocky beach — beavers, birds, coyotes, deer — but never three cougars.

"How many times do you see a cougar? A cougar. Not three. And not that close out in the open," said Greg.

The couple ran out onto their deck and snapped a few pictures, before reporting it to the Ministry of Environment.

Conservation officer Dean Miller said it was a mother and her two cubs, probably on the prowl for food.

"I personally believe that they're using beaches and trails because they have low food energy right now. Looking at that picture tells me that these animals are a bit thin," said Miller.

"If you are a person, a bear or a cougar and you have low food energy you are going to travel along the path of least resistance."

Miller said people should follow the usual safety protocols — keep an eye on children and small pets, don't leave food outside — but there is no cause for concern.

Conservation officers will be tracking the animals to make sure they wander back to the mountains.