The reality of the public health emergency is setting in across B.C., as businesses close and streets clear out to prevent the spread of the novel coronavirus.

The numbers rose on the same day that Public Safety Minister Mike Farnworth declared a provincial state of emergency in B.C., to ensure provincial and federal resources are delivered jointly in an "all hands on deck" approach.

The move, Farnworth said, will allow for the preservation of supply chains delivering groceries and other essential items to the province during the COVID-19 pandemic, though he said the province's supply of goods is currently in "good shape."

Seven British Columbians have died of COVID-19 and 13 people have been hospitalized, seven of whom are in intensive care units.

Henry said there was also a new case involving a resident of a long-term care home, the Haro Park Centre in Vancouver's West End.

Farnworth said the legislature will resume sitting on Monday in order to expedite the province's response to COVID-19 "and the key decisions that will need to be made in the coming days."

The minister said the opposition Liberals and the Green Party have agreed to resume the legislature with a reduced number of members to ensure "the continuity of government and provide important employment supports," meaning all three major parties in B.C. have come together in a unified approach to manage the crisis.

"Our government will do whatever is necessary to protect and support British Columbians and communities and we'll use any and all resources to keep people safe," Farnworth said Wednesday.

The province-wide state of emergency comes in addition to the public health emergency declared Tuesday.

The B.C. government has also announced the postponement of byelections in Victoria, Rossland and Lytton that were scheduled to take place in April, as well as a referendum that was planned for Kamloops.

$82B in federal aid announced

Wednesday brought a number of new measures from the federal government, some in partnership with the United States, to support and protect Canadians during the COVID-19 crisis.

Prime Minister Justin Trudeau announced Wednesday the federal government will spend up to $82 billion on measures to support the Canadian economy through the global pandemic. He said the funds will be a combination of $27 billion in direct supports for workers and businesses, and tax deferrals.

Trudeau also confirmed Canada and the United States have reached an unprecedented deal to close their shared border to all non-essential traffic to stem the virus's spread.

The closure means recreational travellers like tourists or shoppers would be barred from entering either country. Trudeau said trade and the nation's supply chain will be unaffected. Truck freight will still be permitted.

Vancouver to declare a state of emergency

The City of Vancouver will be declaring its own state of emergency at a special virtual council meeting on Thursday.

The declaration means the city will have a wide variety of powers it can immediately enact, including the possibility of closing all restaurants indefinitely to in-person service.

Delta Mayor George Harvie has also asked Emergency Management B.C. for the authority to declare a local state of emergency in his city, saying it would give Delta "additional abilities to protect the community."

The chief justice of the B.C. Supreme Court sent out a statement saying all regular operations of the Supreme Court will be suspended, effective immediately, until at least the end of April. An official announcement is expected later Wednesday.

On Wednesday, the decision was made to shut the provincial courthouse in Vancouver, as well as the downtown community court, until further notice. Both operate out of the same building at 222 Main St. on the edge of the Downtown Eastside.

The courts are among the busiest in the province. The decision to shutter them follows the indefinite closure of the Chilliwack court on Tuesday along with the courts in Nanaimo and Campbell River.

In B.C., provincial health officer Dr. Bonnie Henry officially declared a public health emergency on Tuesday after the total number of COVID-19 patients in the province rose sharply to 186. Seven people have now died of the disease in the province, including six connected to an outbreak at Lynn Valley Care Centre in North Vancouver.

The declaration means Henry now has the power to make verbal orders to contain the spread of the novel coronavirus, and the authority to compel police to immediately enforce those orders. 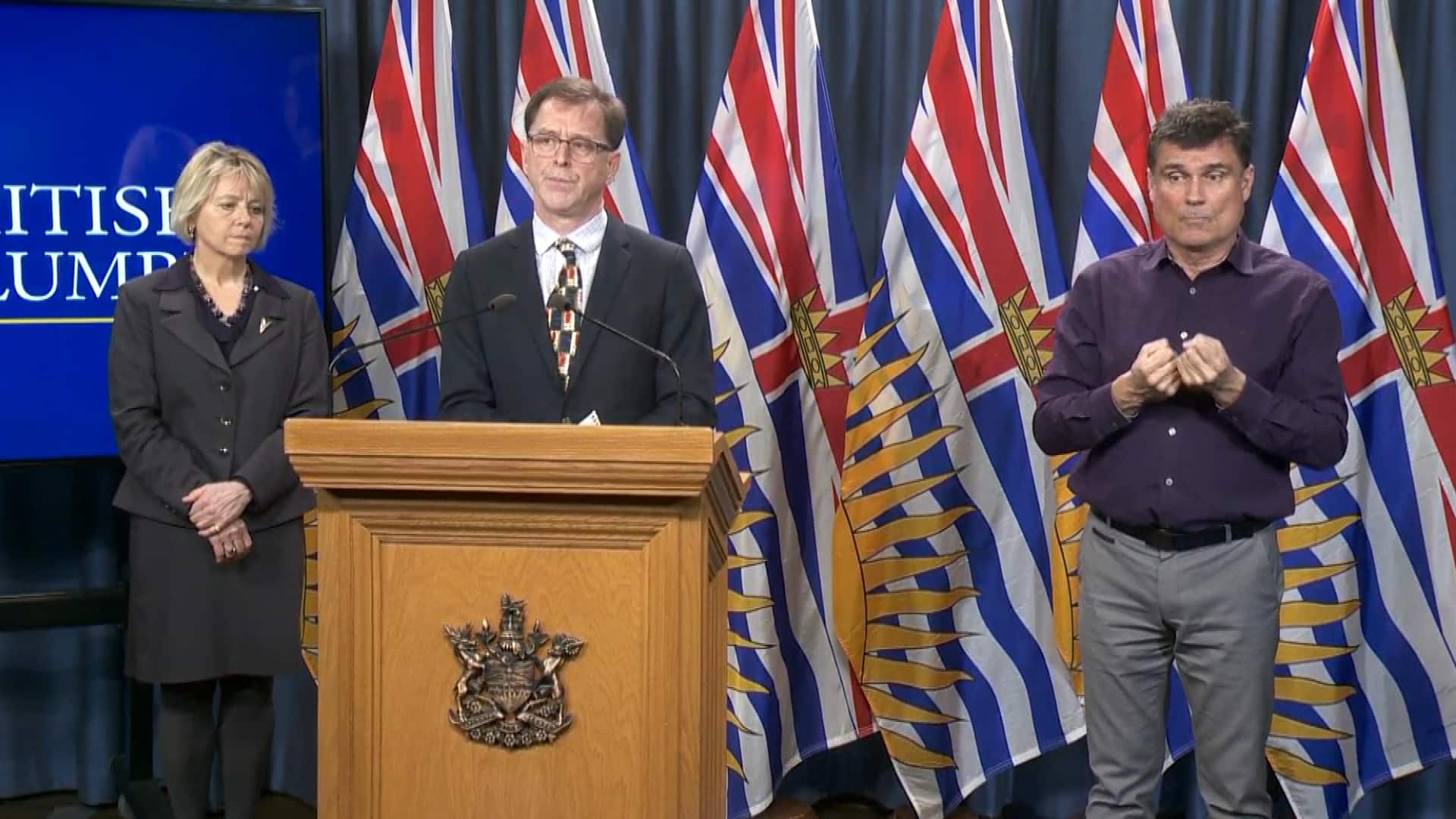 The reality of the public health emergency is setting in across B.C., as businesses close and streets clear out to prevent the spread of the novel coronavirus.

All bars, nightclubs and pubs in the province have been ordered to close indefinitely, and other businesses have been told to implement social-distancing measures to keep people one or two metres apart. Any restaurant or cafe that can't achieve that has been told to offer only takeout or delivery meals.

B.C.'s ban on gatherings of more than 50 people remains in effect, and people returning from any international travel have been ordered to self-isolate for 14 days.

In B.C., Finance Minister Carole James said she expected employment insurance eligibility to be extended as early as Wednesday to include those who wouldn't usually qualify, such as contractors and part-time or self-employed workers.

On Wednesday, Trudeau said the federal government's aid plan includes a new Emergency Care Benefit to provide income support to workers who have to stay home but don't have access to paid sick leave.

Classes suspended at all B.C. schools

Meanwhile, all courts in B.C. are restricting operations and some RCMP detachments are limiting their front counter service to reduce the spread of the virus. Public facilities including recreation centres, swimming pools and libraries have also been closed.

The B.C. government's main message to the public is to practise vigilant hand washing, work from home if possible and maintain social distancing.

The health minister and the provincial health officer demonstrated the concept of social distancing at a press conference on Tuesday. 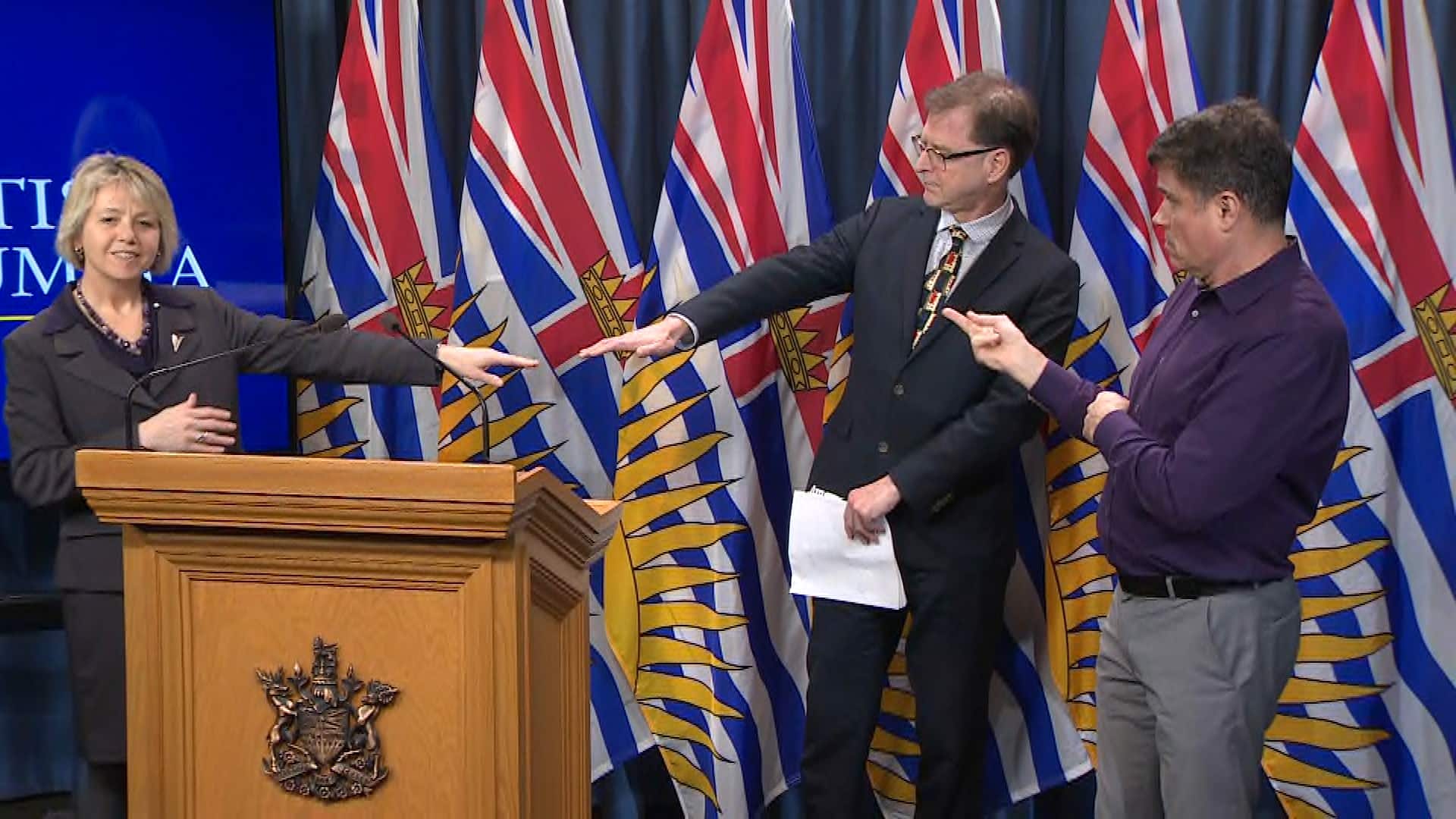 The B.C. government continues to urge members of the public not to hoard groceries and other necessities.

"There isn't any need to overstock your own supplies. Doing so will put at risk seniors, single parents and others who need those necessities," Finance Minister Carole James said Tuesday.

Health officials widely agree the most important thing you can do to prevent coronavirus and other illnesses is to wash your hands regularly and avoid touching your face.

The World Health Organization said more than 80 per cent of COVID-19 infections are estimated to be mild.

Stay home. Isolate yourself and call your local public health authority. Do not visit an emergency room or urgent care centre to get tested.