Vancouver real estate guru Bob Rennie has managed to sell 128 condos at the former Olympic Village site over the weekend, he announced on Tuesday morning. 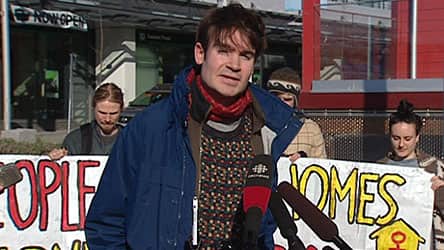 Vancouver real estate guru Bob Rennie has managed to sell 128 condos at the former Olympic Village site over the weekend, he announced on Tuesday morning.

The sales are still subject to financing, but Rennie says response has been so strong he's considering clawing back some of the units that had been identified as rental condos.

Rennie says taxpayers of Vancouver, who are currently financially responsible for the project, should be pleased with the response. He had promised the receiver of the troubled condominium development that he would sell 60 condos in 60 days.

"I think we are off and running now and I just want to be cautiously optimistic that we have stabilized the asset for the taxpayer and now its time to move forward on an orderly basis," said Rennie.

The city originally planned to use about 250 units in the development as low income social housing, but that figure was cut to 125 last year, when the city decided to rent 125 of the units to emergency workers at market rates.

Organizer Nathan Crompton says a tent village will be erected at the site on Saturday.

"I hope that Vancouver sees this as a city-wide issue and that thousands of people come down and to say that we are going to disrupt this marketing effort every day until we get the housing legacy that was promised," said Crompton.

Taxpayers still on the hook

A total of 230 units were offered for sale this past weekend. Another 265 units in the development were sold before completion and  250 have been assigned as rental stock by the city.

The $1 billion development, which has a total of 1,100 residential suites, has been in financial trouble since the original financiers backed out of the project prior to the 2010 Olympic Games.

The City of Vancouver was forced to step in and provide about $700 million in emergency financing. But the downturn in the real estate market made it difficult to sell the units after the Games, forcing the city to eventually agree to Rennie's plan to slash prices last week by an average of 30 per cent.

Rennie, who's been nicknamed the 'Condo King,' earned his reputation as real estate marketing guru by selling thousands of condo in projects across B.C.'s Lower Mainland.