People living near Vancouver's busiest transit hub at Commercial Drive and Broadway say the don't want a development plan to ruin their neighbourhood. 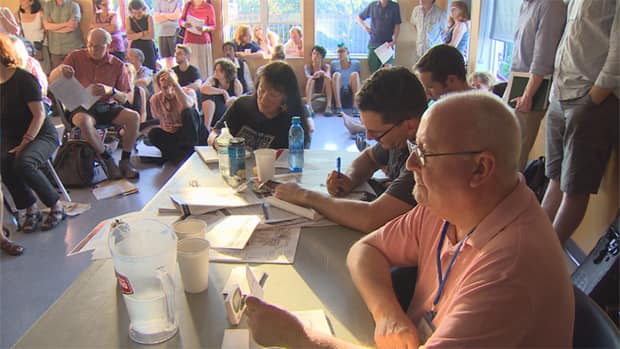 A public forum to discuss rezoning and redevelopment potential for the area around Commercial Drive was packed with hundreds of Grandview-Woodland residents scared of losing their beloved neighbourhood.

Some of the people living near Vancouver's busiest transit hub at Commercial Drive and Broadway said at Monday's meeting they don't want to see huge condos move into the neighbourhood just for the sake of more density.

Resident Garth Mullins said the city shouldn't be trying to make big changes to an area that works.

"We already have a sustainable community with a good balance of cultures and heritage, and stuff like that. This is the model. Don't come here to fix it — export it to other places!" Mullins said, to applause and cheers.

The area's MLA, Shane Simpson, says it appears to him that the planning process for the neighbourhood took a wrong turn.

"Sometimes these processes go sideways. That's a reality. It's not because anybody is being malicious, it just happens," he said.

"This process has gone sideways. It's time to get it back on track. That means pulling back. That means taking the time necessary to go through and re-establish the credibility of this process."

Matt Shillito, assistant director of community planning with the  City of Vancouver, says the reality is that density needs to increase, and the city is trying to find ways to make it happen.

"We live in a city that is growing and we need to accomodate that growth," he said.

However, the land use plan is just a proposal and the city will be seeking more public input to go into a draft community plan for the Grandview-Woodland area, he added.

"We are going to take all of that feedback and we are going to have some more events over the next few weeks to involve people from the wider community," Shillito said.

The report on the community plan for city council is scheduled to be completed by the fall, but more than 500 people have already signed a petition calling on the city to delay the report, and extend the consultation period by six months.