Former Liberal cabinet minister Christy Clark has officially joined the race for the leadership of the B.C. Liberals and the premiership of the province with a proposal for a free vote in the legislature on the future of the HST. 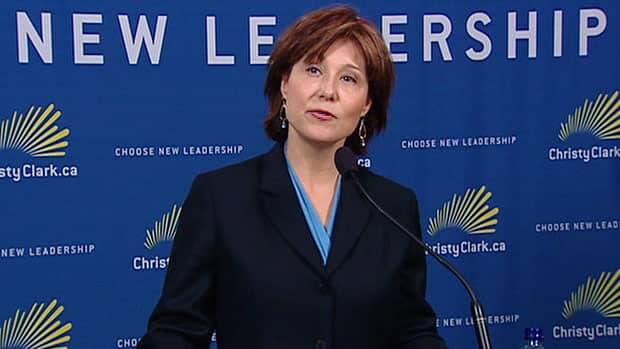 12 years ago
Duration 3:58
The CBC's Stephen Smart looks at Christy Clark's advantages and disadvantages in her race for leadership of B.C. Liberal Party

Former Liberal cabinet minister Christy Clark has officially joined the race for the leadership of the B.C. Liberals and the premiership of the province with a proposal for a free vote in the legislature on the future of the HST.

Clark made the announcement Wednesday morning on CKNW radio in Vancouver where she has worked as a host. She later appeared at a rally filled with members of the media and supporters at the SFU Segal Graduate School of Business.

Clark, who was not accompanied by any sitting MLAs on the stage at her announcement, said she wanted to bring more open discussion to the B.C. Liberal Party and promised to spend more time listening to the people of B.C.

While Clark will be remembered by many as a confrontational education minister who had a run-in with the teachers' union, on Wednesday morning she was preaching virtues of inclusion and debate within the Liberal Party.

"Let's have a political party where we can have debate and discussions, where we can disagree and then find common ground."

The working mother said supporting families will be a major focus for her campaign, and if she wins, she plans to bring a work-life balance to the premier's office that will allow her to continue to spend time with her young son.

Clark outlined her first policy by saying she did not expect the HST to survive the coming referendum. Instead, she supports putting its future to a free vote in the legislature.

But that idea immediately ran into opposition from another Liberal leadership candidate. George Abbott said the HST bill passed three readings in the house last spring and another vote makes no sense.

Clark is already considered to be the front-runner in the race to replace Premier Gordon Campbell. Several polls put her far ahead of all the other four declared candidates from the B.C. Liberal cabinet.

If Clark does win the leadership of the governing party, she would also become premier, although she would be expected to immediately seek a seat in the legislature in a byelection.

Clark's decision to enter the race was leaked when a poll for new members enrolling on the B.C. Liberal Party's website listed her as one of five candidates new members could register their support for on Tuesday. But soon after the story broke, her name was removed from the website.

Clark was first elected to the legislature in 1996 in the riding of Port Moody-Westwood as a B.C. Liberal and served as an opposition critic. She also served as a campaign co-chair for the Liberals' 2001 election sweep when she won her seat again.

Under Campbell, she served as minister of education and deputy premier and as minister of children and family development before stepping down from politics before the 2005 election.

She then ran for the NPA nomination to run for mayor of Vancouver, but lost to Sam Sullivan in 2005, before becoming a radio show host with CKNW.

The party has scheduled the leadership vote for Feb. 26.