Christy Clark will head a majority B.C. Liberal government, after leading her party to a stunning come-from-behind victory, although she was unable to hold on to her own seat. 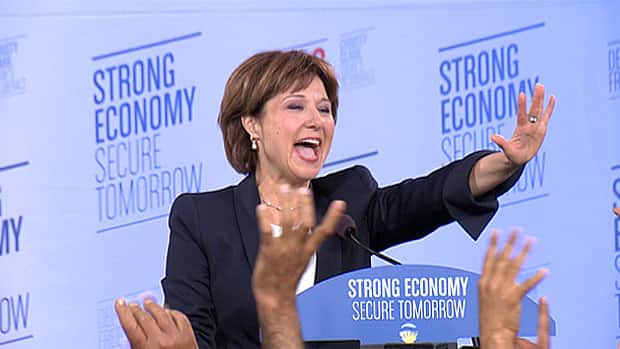 But Clark lost a tough fight to hold on to her seat in Vancouver-Point Grey, to high-profile NDP candidate David Eby by 785 votes. Despite the riding defeat Clark can still be premier, but it is expected she would seek a seat in a byelection in a safer Liberal riding.

The last time a B.C. party leader became premier but failed to win their seat was in 1924, when both Premier John Oliver and the Leader of the Opposition William John Bowser were defeated in the general election.

Not only did Clark defy countless polls predicting her defeat, she increased her party's majority in the legislature by five seats and became the first woman to be elected premier in a general election in B.C.

The NDP won 39.5 per cent of the popular vote, giving them 33 seats in the legislature, three fewer seats than they held before the election.

Green Party candidate Andrew Weaver won the first provincial seat for the party in the Vancouver Island riding of Oak Bay-Gordon Head, but party leader Jane Sterk failed to win her seat in Victoria. Overall the Greens won eight per cent of the popular vote.

Independent Vicki Huntington was re-elected in Delta South, making her the only one of three independent MLAs to hold on to her seat.

Clark started the campaign as the clear underdog in the poll, trailing by 20 percentage points. But during the course of the 28-day campaign she closed the gap significantly with a campaign that focused on debt reduction and economic growth.

The Liberals and their supporters also ran a slew of attack ads casting the NDP and its leader, Adrian Dix, as untrustworthy and out of control with billions of dollars in campaign promises.

During the campaign Clark also proved herself to be a much more personable campaigner than Dix, who appeared nervous during the only televised leaders' debate.

Clark reaches out in speech

Clark joined her party supporters at the Wall Centre in Vancouver just after 11 p.m. Tuesday  to celebrate her victory and thank her supporters.

"Well, that was easy," she joked as she opened her speech.

"Together we have succeeded in keeping B.C. on the right track … Our future has never been brighter," said Clark, who stuck close to her campaign message of growing the economy, balancing the budget and creating a "debt-free B.C."

"The work begins anew with this strong new team, with a renewed party, a renewed mandate, and the confidence of British Columbians to build this economy, to make sure we live in the province we all dreamed of for our children."

Clark’s victory will be welcome news for the oil and gas industry.

Developing the province’s natural gas reserves was a major plank in Clark’s platform and she also left the door open for two controversial oil pipeline projects to go ahead, but only under certain terms.

Earlier, NDP Leader Adrian Dix conceded defeat in his speech, but said the party will continue to hold government accountable.

"Obviously, we're disappointed," said Dix, whose focus on running a positive campaign failed to win over many voters who were apparently unwilling to trust the NDP to lead the province.

"Our message didn't get out in the way we needed it to get out to win the election."

Despite the party's loss of three seats in the legislature, Dix wouldn't say whether he'll stay on as leader, saying only that he plans to meet with the caucus in the coming days.

On Wednesday, Prime Minister Stephen Harper congratulated Clark and her team on the election victory.

"I look forward to continuing to work with Premier Clark on issues that matter to British Columbians and all Canadians, including jobs, growth and long-term economic prosperity," said a statement from Harper's office.

The victory marks the fourth straight win for the B.C. Liberals, who were first elected in 2001 when Gordon Campbell led the party to the largest majority government in provincial history, winning 77 of 79 seats.

Led by Campbell, the B.C. Liberals, who are not formally linked with the federal Liberal Party, won two more majority governments in 2005 and 2009 before Campbell stepped down following a popular revolt against the HST in 2010.

She then stepped down to spend more time with her young son, before making a failed run for the NPA nomination for mayor of Vancouver. In 2007, she became a talk radio host.

After Campbell stepped down in 2010, Clark returned to provincial politics and won the leadership of the Liberal Party in February 2011 after defeating cabinet ministers Kevin Falcon, George Abbott and Mike de Jong in the race.

She won her seat in a byelection in Vancouver-Point Grey with a narrow victory over Eby, making her the second woman to become premier of British Columbia after Rita Johnston in 1991.

But Clark was considered an outsider by the party establishment and only had the support of one sitting MLA during her leadership campaign. After she took office several cabinet ministers stepped down ahead of the 2013 election campaign.

Heading into the 2013 election, the Liberals held 45 seats, with the opposition NDP holding 36 and four MLAs sitting as Independents.